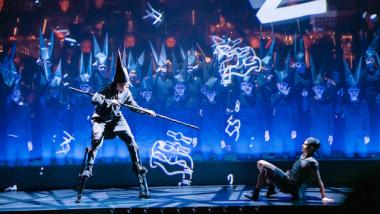 The French seem to understand children better than other cultures. It’s no accident that picture-book and graphic-novel characters from Francophone countries have had enduring appeal across Europe and internationally: Babar the Elephant, Tintin and Snowy, Asterix, the Smurfs (originally les Schtroumpfs), and of course, the Little Prince.

What these Gallic authors grasp is that children don’t consciously “imagine” in the way we do, by momentarily taking pleasure in fiction while holding a firm grasp on reality. Kids don’t fully perceive this division, so there’s no need for them to “play pretend” Their fantasies and dreams are reality, plain and simple. The Little Prince doesn’t “make-believe” that there’s a sheep in the Pilot’s drawing of a box; he knows that his wooly friend is asleep in there, and so does the young reader.

Such credulity in adults is usually labelled superstition or delusion. And yet, the best children’s art not only speaks to little ones, but also gives their parents a nostalgic taste of that long-lost magic. If only for a short while, the San Francisco Symphony managed to reawaken that inner child with their semistaged performance of Ravel’s L’enfant et les sortilèges (The child and the magic spells) on Saturday, the highlight of a season-closing concert devoted to French fin-de-siècle reflections on childhood.

Composed between 1917 and 1925, Ravel’s opera boasts a libretto by Colette, whose novella Gigi was adapted into a musical by Lerner and Loewe. (She’s also the subject of a recent biopic starring Keira Knightley, which is worth a watch to hear Thomas Adès’s score). After his mother chides him for slacking off, a young schoolboy throws a hissy fit, destroying the contents of his room and upsetting his pets. The titular spells (sortilèges) grant sentience to the objects and animals around him, who punish the child for his actions.

It sounds like one of those gruesome cautionary tales from Germany. But much like a similar sequence from Toy Story, it’s all in good fun. Colette’s intent is to entertain kids, not to scare them. Events unfold at a manic, flip-book pace, and any violence incurred on the boy is pure slapstick.

Fittingly, director James Bonas and designer Grégoire Pont looked to the early days of cartoons for inspiration. Their surrealistic production resembled the first experiments with animated cinema by Stuart Blackton in 1906 and Émile Cohl in 1908, both of whom utilized chalk or chalk-line effects. A scrim at the foot of the stage served as a giant blackboard upon which Pont’s doodles came to life, scribbled in chalk by a giant, unseen hand. Soloists were miraculously flattened into two-dimensional beings as they interacted with these projections; their bodies served as “screens” for costumes made of light, and their gestures set off waves of comic-strip motion lines.

With this unassuming, Etch-a-Sketch set piece, Bonas and Pont constructed a phantasmagorical environment that not only induced childlike astonishment, but also the same readiness of the Little Prince to accept this drawn dreamscape as reality. The SF Symphony, partially visible through the scrim, painted Pont’s mostly black-and-white projections with vivid timbral technicolor. Guest conductor Martyn Brabbins of the English National Opera (filling in for Michael Tilson Thomas, who is recovering from heart surgery) exaggerated Ravel’s sudden shifts in instrumental palette that give each episode its own unique feel.

The first half of the opera, a string of dances for enchanted bits of houseware, felt like a variety-show version of the Nutcracker suite. A pair of fed-up armchairs tangoed to a slinking piano solo punctuated by yawning woodwinds and Steven Braunstein’s snoring contrabassoon; the shepherds that adorned the boy’s torn wallpaper joined in a melancholy pastorale, mournfully intoned by the SF Symphony Chorus over sighing reeds; and a broken teapot and cup foxtrotted to a jaunty music-hall tune on muted brass.

This last number was a crowd favorite. Mezzo Ginger Costa-Jackson and tenor Ben Jones were positively charming as the chipped china, hamming it up like a vaudeville comedy duo. Costa-Jackson reappeared later in the form of a flirtatious feline, virtuosically caterwauling like a stray in heat. And Jones stole the show as the demon of arithmetic who tortures the boy with math; perched on stilts and decked in a double-horned dunce cap, he pattered sadistically through nonsensical story problems, occasionally leaping into squeaky falsetto. Serving as his impish minions were members of the Young Women’s Chorus of San Francisco and the San Francisco Boys Chorus. Ironically, they maintained impeccable French diction while speeding through incorrect addition and multiplication answers.

In the title role was smoky-voiced mezzo Isabel Leonard, whose recording of L’enfant with Seiji Ozawa was awarded a Grammy in 2015. Her impression of a hyperactive 11-year-old was spot on: backward-turned baseball hat, perpetual fidgeting, permanent slouch. Vocally, she embodied a lad on the cusp of adolescence who still clings tightly to childhood. Her rough, sarcastic delivery for the boy’s tough-guy act softened to the bashful, tender tone of a wide-eyed tot when the fairy princess appeared. Soprano Anna Christy was radiant as this storybook crush, gently reprimanding her admirer in long, airy phrases that conveyed both sensuality and benevolence. (She also shined as a talking tongue of fire, sending off sparks with her flickering coloratura).

The fairy, in all her wisdom, gets at the true nature of the boy’s misdeeds. It isn’t his room-trashing per se that lands him in hot water with the furniture, but the way he treats these possessions as an adult would — as lifeless objects — rather than as a child would — as friends and guardians endowed with magical animism. In other words, he tries to grow up too quickly.

At the end of the opera, however, the boy redeems himself by mending a squirrel’s paw. In an act of forgiveness, the once-vengeful woodland creatures call for his mother to find him. It isn’t merely an infantile whine — Ravel sets this passage from the perspective of a lost child, whose cry of “Mommy!” is tantamount to a religious plea for divine aid.

As these furry helpers, the combined soloists and choirs rose in an antiphonal invocation of “Maman! Maman!” that carried all the gravity of a choral Miserere. It was an unexpectedly stirring moment — a reminder for the grownups of the emotional intensity children feel for simple matters. “They waste their time over a rag doll and it becomes very important to them,” the Little Prince tells a railway switchman, “and if anybody takes it away from them, they cry ...”

Unfortunately, the portion of the program that preceded L’enfant was far less faithful to the tastes and sensibilities of the few pint-sized listeners in attendance. The concert was supposed to have opened with Britten’s 1958 church opera Noye’s Fludde, which would have offered another opportunity to hear the excellent youth chorus. (According to the SF Symphony, that work will appear on a future season and involve community participation). Instead, members of the orchestra collaborated on excerpts from chamber compositions by Ravel and his contemporaries.

Debussy’s 1915 chanson “Noël des enfants qui n’ont plus de maisons” (Carol of the homeless children), though beautifully executed by Costa-Jackson, was nothing but a shameless bit of Great War propaganda. A pitiful waif, left homeless by the enemy, begs for the spirit of Christmas to “Avenge the children of France!” The composer’s 1908 keyboard suite Children’s Corner, dedicated to his 3-year-old daughter Chou-chou, wasn’t nearly as exploitative. John Wilson played through “Doctor Gradus ad Parnassum” and “Serenade for the Doll” with all the Parisian delicacy and grace we expect from Debussy. But kids aren’t exactly keen on subtlety — they like music with loud noises and catchy melodies. Granted, the technically demanding pieces in Children’s Corner aren’t for children, but about them, composed from the sentimental standpoint of a new parent.

By contrast, Ravel’s suite Ma mère l'Oye (My Mother Goose), presented in its original four-hand piano edition from 1910, was written with the abilities of a 6- and 7-year-old in mind. Wilson, joined by pianist Peter Grunberg, gave an atmospheric reading of “Le jardin féerique” that conjured the nocturnal glow of a fairy’s garden. But it’s by no means a work for the concert hall — we have Ravel’s orchestral transcription for that. Rather, it’s a chance for brother and sis to show off for grandma in the parlor, giggling to one another when their hands momentarily cross, when they pound through the grand-finale chords, and when the lucky sibling assigned the primo part gets to sweep up and down the top keys in two-octave glissandi.

It’s no fun watching a bunch of stuffy grownups in suits performing something that’s meant for you to play. I’ll let the miserable-looking boy I overheard at intermission give his groaning critique of the filler chamber fare: “I hated it.” Out of the the mouths of babes …

Juraj Valčuha and the S.F. Symphony: Ecstasy and Agony

The pairing of Bach with Shostakovich offers a study in emotional contrasts.