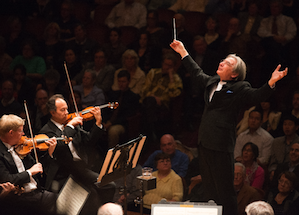 Mahler’s Symphony No. 9 is an enormous challenge even for expert Mahlerians like Michael Tilson Thomas and the San Francisco Symphony. The work has been perceived, both musically and biographically, as an attempt to wrestle life from death, in a scenario ascribed to the composer facing a fateful heart ailment.

But it’s just as much a struggle for coherence. Over its four-movement, 90-minute span, the symphony’s late-Romantic musical gestures sprawl about, dissolve, insist on returning, and continue past the point of generating any more expressive possibilities, until the work finally seems to turn in on itself. Far beyond the autobiographical narrative, it is the sound of Romanticism’s ebb tide, a style and sensibility that we hear dying away by the time the work reaches its gentle end.

The performance of this overflowing work last Thursday at Davies Symphony Hall was one of emotional richness and great skill, with the musical line handled rightly at every level, from individual phrases to the symphony’s large-scale architecture. Tilson Thomas has a special affinity for Mahler’s mix of ecstatic and erratic, and deftly led the players through the small, intimate moments that dot the work, the music’s sharper mood swings and it's emotional progression.

Above the countless waves and surges of the full orchestra, there’s an arc that extends to connect the quiet, haunting moments that stand out in relief as the most expressive in the work. The symphony’s opening measures, with their counterpoint between harp, horns, and low strings, bring a strange, compellingly ambiguous moment before the full orchestra joins in. This passage’s echoes later in the work, especially the chillingly beautiful flute solo toward the end of the final movement, again over the harp, remained vivid after the hyper-emotional passages for full orchestra died away.

The playing, whether in the most violent tutti passages, or the carefully balanced music of these quiet, distilled moments, was outstanding all around, especially in the low brass. The string playing was the most remarkable of all. At their first entrance in the opening movement, the full strings gave off a gorgeous collective shimmer even as the counterpoint between individual sections came through in a clear, delicately balanced web. There was the roughness that filled the peasant-style ländler that opens the second movement, the burnished sound that filled the hall as the fourth movement began, and finally, the transporting, sustained soft playing that marked the work’s final measures.

It’s not surprising this performance was so fine, given the amount of practice the conductor and players have had with this piece. Mahler’s Ninth is a work that Tilson Thomas has programmed, recorded, and toured in recent years, and the performance left no question of his, and the orchestra’s, command of the work. When a piece becomes this familiar, though, it’s worth asking if something the orchestra does so exceedingly well has to be done so often.