Hector Berlioz’s Roméo et Juliette is twice as long as his Symphonie fantastique, but it’s less than half as well known. The San Francisco Symphony’s new recording, under Music Director Michael Tilson Thomas, gives listeners a chance to get to know this remarkable epic. 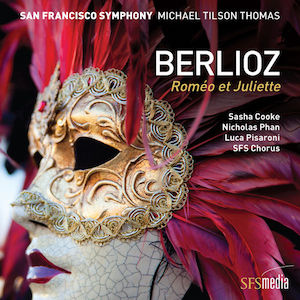 Berlioz gave up the idea of writing an opera on Shakespeare’s play in favor of this part-vocal hybrid symphony. He focuses on a few plot points involving the lovers: their meeting at a Capulet party, their passion (the often-excerpted “Love Scene”), their tragic deaths and the repentant aftermath. Plus, for comic relief there’s not one but two Queen Mab scherzos. The instrumental one is occasionally heard separately, but the vocal one is the highlight here. Nicholas Phan’s tenor voice dances lightly through this, with the Symphony’s superb chorus right on his heels.

Of the other vocal sections, the narrative prologue is the dullest, but the chorus sings well. Mezzo Sasha Cooke gets a simple song that’s not quite in the voice of Juliet. The long finale is purely operatic, dominated by a recitative and aria in which Friar Lawrence (bass-baritone Luca Pisaroni, with vivid stage presence) chides the feuding families (the chorus, sounding suitably humble) to repentance.

But Berlioz reserves his greatest work for the orchestra. The “Love Scene” is just one of several instrumental movements in his characteristic style. The tense fugal introduction, the lively party segment, the scherzo, and the awesomely dramatic “Romeo in the Tomb of the Capulets” are all played by the S.F. Symphony to brilliant effect. The tomb scene is so closely tied to Shakespeare’s plot that Berlioz inserts a note in the score advising conductors to omit it if the audience doesn’t know the play.

Here, as elsewhere, the CD’s track listing doesn’t do justice to the complexity of Berlioz’s construction, and the notes aren’t much help. Nor are texts provided, though all the singers’ French enunciation is clear. The performance and engineering, however, are all that Berlioz could ask for.

Running the Gauntlet of Berlioz’s Romeo and Juliet

MTT with the S.F. Symphony, Mason Bates, and John Adams get the nod in classical-music categories.