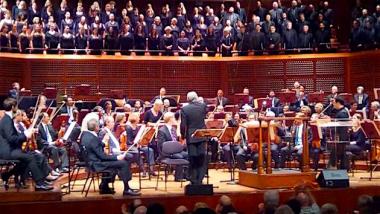 S.F. Symphony Stravinsky Festival Opens with Perséphone and The Firebird

With Michael Tilson Thomas’s downbeat at the San Francisco Symphony’s Sunday matinee, part of the SFS celebration of Igor Stravinsky, the opening measures of Perséphone prompted memories of another Stravinsky work: Oedipus rex.

Tenor Nicholas Phan’s parlando recitation of André Gide’s lyrics about the Greek queen of the Underworld had the same characteristics as the Speaker’s introduction of Oedipus, another tragic Greek figure (the text by another French writer, Jean Cocteau) — a stentorian call of impersonal grandeur, driven by austere, near-dissonant music.

And then, after a few minutes, something strange happened: the “Stravinsky we know” disappeared, not to return until the “General Thanksgiving” finale of The Firebird, the other work at this concert, a couple of hours later. 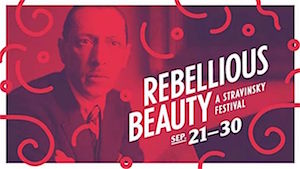 The poster for the Stravinsky Festival says “Rebellious Beauty,” which is certainly one proper description of the composer’s seminal works, as would be the terms “wildly syncopated, ecstatic, jagged, and overwhelming,” all of which would apply to The Rite of Spring and Petrushka (both on this week’s concerts), the Violin Concerto, Les noces, Agon, Concerto in D, Feu d’artifice, Capriccio for Piano and Orchestra, and so many more.

But not this time. Even with the full orchestra and three choruses filling the stage and the Terrace above it, almost the entire concert was more about beauty than rebellion — quiet, plaintive, and “un-Stravinskian.” And Tilson Thomas got a full measure of it, slow and easy, even a bit excessively so in The Firebird.

The 1934 Perséphone, one of the Russian composer’s rarely performed works, is about the daughter of Demeter (Mother Earth), an ancient, beloved deity of the Greek pantheon. The music is mostly gentle and meditative, as the story’s three chapters unfold: “The Abduction of Perséphone,” “Perséphone in the Underworld,” and “Perséphone Reborn.” The violence of the abduction is not portrayed and the music gets “big” only in the finale.

The text of the story, including poetic words from Perséphone, are delivered by the tenor and — creating a buzz in town — by 87-year-old film legend Leslie Caron. Nobody could speak the French text better, but there was a problem with the balance, and Caron’s amplification did not provide the clarity and dominance the voice should have had. That, at least, was the experience from the middle of the orchestra section — it might have been different in the balcony.

Orchestral excellence persisted beyond the intermission and into The Firebird, with affecting solos by concertmaster Alexander Barantschik and Associate Principal Cellist Peter Wyrick. It was here that Tilson Thomas’s presentation of “Stravinsky Nice” went into over (or under-) drive, as sections such as “Supplication of the Firebird” and “Dance of Kashchei’s Retinue” came across not only as mild-mannered, but also without the inner tension that’s very rarely lacking in Stravinsky.

If memory serves, the S.F. Symphony’s Firebird three years ago, under Esa-Pekka Salonen’s baton, was more consistently lively and brisk. Still, the enormous overarching structure of the 1910 suite was preserved, even as the orchestra played the demanding program on Sunday for the third time in 42 hours.