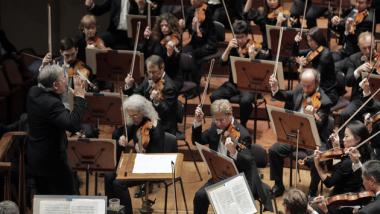 To be early is to be on time. Unless you’re attending a San Francisco Symphony concert, apparently, where to be early is to be late. This past Friday at the orchestra’s second Stravinsky festival installment, an ominously long will-call line stretched from the Davies Hall down Grove Street and curled onto Franklin. Even though all these attendees — including this reviewer — arrived with what would have been enough time to pick up their tickets on a normal night, the box office couldn’t keep up with the rush on this particular evening. Instead of delaying the concert slightly, however, the management simply turned away several dozen of these “latecomers” from the auditorium.

And so, dear reader, you won’t be getting a report on Petrushka (though one woman assured me it was “amazing”). I tried my best to get in, but the two attendants herding the line of patrons didn’t particularly care that I was with the press. The real victims are, of course, the paying ticketholders who were cheated out of a third of the concert.

Actually, it wouldn’t have taken much longer to get them in — by 8:05, everyone in line was standing idly in the lobby with a drink, watching the tinny-sounding livestream on the monitor. This poorly handled snafu sure as heck doesn’t help the image of classical music as stuffy and elitist; neither does the fact that audience members in boxes were graciously ushered to their seats ahead of those who were forced to wait.

But let’s not confuse the institution’s management with the artists. Granted, there was a certain rigidity to violinist Leonidas Kavakos’s playing — though it felt appropriate in Stravinsky’s 1931 Violin Concerto, which is something of an ironic commentary on classical virtuosity. Kavakos held a stiff bowing arm during the opening Toccata, digging in deep on extended pitches and executing the mock-Mozartean passagework with an obsessive attention to rhythm and articulation.

Kavakos’s deliberate overplaying, driven on by the orchestra’s mechanical oompah accompaniment, had a kind of deadpan comic effect — as if he were imitating the lifeless, technical perfection of an unimaginative musician. But at certain points he would momentarily break character with giggling harmonics and hiccupping portamenti.

The third movement, by contrast, approached the genuine emotion of a standard violin concerto. Kavakos shed the shtick, treating Stravinsky’s plaintive melody as a lament and reinterpreting the impossibly wide triple- and quadruple-stop chords that appear in each movement as cries of anguish in this new, less-humorous context. The melancholic concluding bars, where Kavakos’s meandering solo line was joined only by a pair of flutes, had a soft, surreal beauty.

In the second half of the evening, Michael Tilson Thomas carried over the precise, detail-orientated elements of the Violin Concerto into The Rite of Spring. Instead of the usual unbridled chaos we associate with the ballet’s primitivist depictions of pagan rituals, Tilson Thomas seemed to retroactively tap into Stravinsky’s later neoclassical style. In the introduction, avian woodwind lines and grotesque folksong paraphrases typically pile up in a tangled wash of noise; the S.F. Symphony soloists, however, treated the passage like some massive, 30-voice Bach fugue, achieving remarkable contrapuntal balance. Themes I had only half-noticed before suddenly popped out in stark clarity, notably Luis Baez’s cheeky interjections on E-flat clarinet.

If this clean, crisp reading of the score lacked the earthiness of other interpretations, it was no less terrifying. Tilson Thomas had a little trick up his sleeve — he kept the dynamics relatively subdued throughout, even holding back on the syncopated pounding of the “Augurs” chord. Without any buildup, it was impossible to gauge when he would unleash a ferocious juggernaut of sound, as he did at the end of the “Spring Rounds” section. It was one of the most overpowering moments I’ve experienced in live performance and had me tensed up in my seat, rendered breathless and immobile by the roaring brass and stabbing strings.

But this kind of jump-scare tactic loses its effect if you use it too often — even with Edward Stephan pummeling away at the timpani like a rock drummer, the closing sacrificial dance didn’t shock like earlier outbursts. But I did appreciate the deliciously creepy “Ritual Action of the Ancestors” that preceded the finale, with its trance-inducing incantations from the flute section joined by Russ deLuna on English horn.

This Wednesday, the S.F. Symphony will play the opening-night gala concert at Carnegie Hall and then repeat the Stravinsky program with Kavakos on the following evening. Later this month, you’ll get a chance to hear more Stravinsky at Davies when conductor Valery Gergiev and the Mariinsky Orchestra perform the Symphony in Three Movements, the Symphony in C, and the Capriccio for Piano and Orchestra featuring pianist Denis Matsuev. Just make sure you show up to the box office extra early.

S.F. Symphony Stravinsky Festival Opens with Perséphone and The Firebird