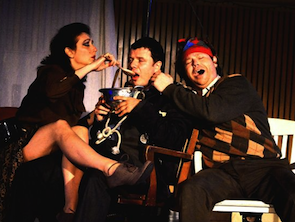 Even with the doors closed tight and the windows blocked, a soft haze of sunlight made its way into the barn-like performance space at the Mt. Diablo Unitarian Universalist Church in Walnut Creek. The weather was too clear and bright on Monday afternoon to prevent it.

The darkness — by turns glowering, mordant, recklessly comic, and bleak — was all in the music and drama, in a pair of chamber operas staged on Holocaust Remembrance Day on April 28 by Festival Opera. The Emperor of Atlantis, written by composer Viktor Ullmann and librettist Peter Kien when the pair were held at Theresienstadt, the same Nazi concentration camp where the children’s opera Brundibar was performed, dominated the program.

It’s no surprise that Atlantis was never seen or heard at the camp. The wonder is that this caustic and despairing piece survived at all. Subtitled "Death Abdicates," the satiric fable unfolds in a prologue and four scenes. Darting from snare drum rolls to dreamy saxophone tunes, lyrical love duets to absurdist spoken dialogue, the emotionally labile score careens along with an antic drive, jolted now and then by blasts of organ music.

The opening of stage director Beth Greenberg’s production set a Brechtian music hall tone, as a character known as the Loudspeaker (Roberto Perlas Gomez) introduced the other players, posed and leering at the audience. Props on the minimally equipped stage ran to rolling pin guns and kitchen pot helmets. Life in the camps got made up and blown up along the way.

Harlequin (a nimble and insinuating Christopher Bengochea) fell into a musing conversation with Death (the somber and chalky-faced Philip Skinner), nostalgic for the “old ways of dying.” A manic Emperor (played and sung with a sly blend of manic verve and imploded intensity by Eugene Brancoveanu) fired off hopeless battle orders, a Hitler-mimic mustache slapped in place now and then when he held a paintbrush to his upper lip.

A Soldier (Bengochea again) and Maiden (the tenderly earnest Rebecca Garcia) enjoyed a yearning, sweetly futile love scene. Death and the Emperor engaged in a poignant and philosophically searching dialogue at the end. The Emperor’s wrenching farewell (“Remember me”) lifted Atlantis into the realm of somber tragedy, signaled by an ensemble chorus reminiscent of a Bach chorale.

First performed on the West Coast by San Francisco Spring Opera Theater in 1977, The Emperor of Atlantis commanded attention in this Festival Opera production. Music director and conductor Matilda Hofman gave the music’s tonal shifts a striking sense of purpose, both discordant and inevitable. The acting and singing, with the exception of Valentina Osinski’s undercharged Drummer Girl, was vital.

The room felt very dark, indeed, as Atlantis came to an end.

Another Sunrise, for solo vocalist and chamber orchestra by local hero Jake Heggie (score) and Gene Scheer (libretto), led off the double-bill. Commissioned and first performed in Seattle in 2012, the piece for solo vocalist and chamber orchestra is based on the memoir of Holocaust survivor Krystyna Zywulska. Sent to Auschwitz-Birkenau as a political prisoner, Zywulska concealed her Jewish identity and worked in the camp cataloguing the possessions of other Jews slaughtered in the ovens. She wrote about her experiences after the war and lived until 1993.

It’s clear why Heggie, known for his operas Moby Dick, Dead Man Walking, and others, would be drawn to this potent story. Brimming over with grief and survivor’s guilt, Zywulska spills out her conflicted feelings to a tape recorder in her bedroom. By spinning his score out of a small, impacted cell of melody, Heggie aims to suggest both the keening pain of his heroine’s memories and the abraded barrenness as well, with shiftily unresolved harmonies and a spare orchestration.

The emotional effect of this tightly focused approach was rather circumscribed. The music, in a tentative, uncertain performance by strings and woodwinds, seemed too poised and contained. Marie Plette gave a committed performance, getting in and out of bed, crossing and re-crossing the room as Zywulska recollected her past. But she didn’t have enough to work with and build on, either musically or dramatically.

Festival Opera is struggling to stay afloat. Executive director Sara Nealy told the audience the company needs to raise $100,000 in a month and a half. Ensembles that can mount programs such as this one deepen the richness of a region’s musical life. Let the light shine on Festival Opera.