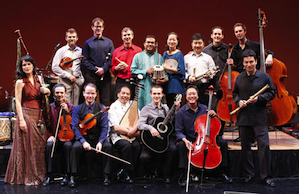 The Project’s performance offshoot, the Silk Road Ensemble, has been a welcome guest at Cal Performances for many years and is highly popular with Berkeley audiences. The ensemble visited Zellerbach Hall on Sunday — for the first time without Artistic Director Ma — as part of a promotional tour for its new CD/DVD, A Playlist Without Borders. Like the concert, the new recording features pieces composed by members of the SRE.

By sharing and exploring each other’s musical traditions, the members of the SRE generate some remarkable and interesting new works.

The international musical cross-pollination that takes place under the umbrella of the Silk Road Project has always been one of its strongest selling points. By sharing and exploring each other’s musical traditions, the members of the SRE generate some remarkable and interesting new works.

One of the highlights of Sunday’s concert was the entirely improvised duet between Kalhor and Das, named Jugalbandi, which is a term from Indian classical music that refers to a performance in which two musicians are neither soloist or accompanist, but totally equal.

Das described the musical encounter with Kalhor as “a meeting of two lost cousins,” and these “cousins” obviously had a lot of interesting stuff to discuss and exchange. Kalhor, whose Persian kamancheh produces a velvety soft, slightly husky string sound, at one point explored the more-percussive side of his instrument, while Das pulled expressive and remarkably rich melodic phrases from his Indian tabla.

Another strong piece was Saidi Swing, for tabla and percussion, composed by SRE founding member and percussionist Shanahan, based on a dance rhythm that is believed to originate from Upper Egypt, and performed by Shanahan, Das, and Gramley as the middle part of the Silk Road Suite with which the concert opened.

Kalhor at one point explored the more-percussive side of his instrument, while Das pulled expressive and remarkably rich melodic phrases from his Indian tabla.

If only all the encounters and exchanges had yielded equally interesting results. But, in between these and a few other nice moments, there were long stretches of rather uninspired and directionless trifling in a watered-down, vague musical vernacular. Obviously, not every attempt at “fusion” is equally successful and effective. Certain musical styles simply work better in a more-orthodox setting.

The SRE’s previous release was nominated in 2010 for a Grammy Award as Best “Classical Crossover” Album — which serves as a term to describe Sunday night’s music. Still, I have heard more-convincing attempts to blend international musical styles and genres coming from the New Age corner.

And one more thing: I cannot imagine that I am the only one who is bothered by the fact that the Silk Road Ensemble, with all its lofty and politically correct ideals of international cooperation, integration of cultures, exchange of ideas, and respect for diversity and inclusiveness, somehow finds it OK to put an ensemble on stage that consists of ten guys and only one woman, Cristina Pato.