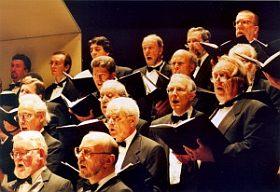 Singing of War and Peace

"Community" was the watchword of the Oakland Symphony Chorus' 50th-anniversary gala Saturday at the Regent's Theater of Holy Names University. While the occasion, billed as "a celebration of community and song," presented both these qualities in abundance, it was community that ultimately took center stage. Lavish opening and closing receptions, musical programming centered on the theme of unity, and an intermission acknowledgment of honored guests (including nearly all the group's conductors over the past five decades) inspired an unmistakable esprit de corps among the attendees.

As for song, the program's two offerings cannily blended a historic masterwork with a new commission, embodying the occasion's dual purpose of revering the past and celebrating the future. Holding up tradition was Joseph Haydn's famous Mass in Time of War, while local composer Sanford Dole provided an ecumenical expression of amity with his multiculturally inspired work titled The Fabric of Peace, a work for chorus and piano composed specifically for the occasion.

Textually the Dole piece is a hodgepodge, blending Hindu and Christian scripture with a historic treatise on singing and modern poetry, resulting in a patchwork quilt. Musically its main features are more consistent: large swaths of stately homophonic text declamation, emphasis on dense harmonies, and sinuous melodic lines passed liberally among the voices.

Dole's penchant for madrigalistic "word painting," plus his heavy use of quotation (citing everything from Gregorian chant to William Byrd's Mass for Four Voices to Beethoven's Für Elise), occasionally transgressed into gimmickry. OSC responded to this commission with clear enthusiasm. Music Director Lynne Morrow has instilled good basic discipline into this community ensemble, which effectively rose to the task of performing a challenging contemporary work. And if an occasional lapse in blending or unsteady entrance emerged, they were no more obvious than such minor faults would be for any community-based ensemble, and they scarcely disrupted the otherwise steady, heartfelt performance.

The stately opening section "Let us be united," drawing on the Hindu hymn collection Rig Veda, presented a series of insistent proclamations of oneness. The choir both ably projected the commanding text and securely handled the movement's chromatic harmonies, while the more languorous second movement, "Song of the Spirit," introduced Dole's lyrical side in a series of sensuous introductory melodies. 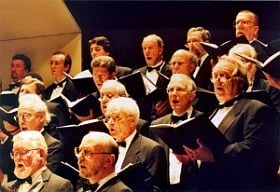 The a cappella third movement, "The Exercise of Singing," takes as its unlikely source the preface from a 1588 songbook by Byrd and contains, in an explicit nod to the past, Dole's most patent use of Renaissance word painting. A "Reverie" for solo piano, played with affecting sensitivity and grace by Susan Soehner, preceded a vigorous performance of the final exultant text, "Glory to God for All Things."

For the Haydn, OSC joined forces with the talented Oakland Youth Orchestra and a crop of exciting young soloists. The exultant Kyrie featured soprano Ann Moss in an appealingly buoyant rendering of several solo passages. Her sweetly crystalline sound contrasted pleasingly with the rich, velvety tone of mezzo-soprano Bonnie Brooks in their brief duos.

Fine choral balance and blend characterized the Gloria, which also featured the heroic baritone Torlef Borsting powerfully delivering the Qui Tollis section. Highlights of the Credo included well-delivered solo interjections and a suitably dramatic choral rendering of the text, though one marred by frequent disagreements in final consonant placements. The Sanctus revealed some flaws in ensemble, as the chorus and orchestra now and then disagreed on tempos or struggled to stay together.

Better handled was the solo quartet Benedictus, with Moss, Brooks, Borsting, and tenor Darron James Flagg coming together as an ensemble beautifully matched in dynamics and interpretive approach. Finally, the orchestra offered stellar support throughout the Mass, displaying a precision and maturity belying the youthfulness of its members. Special kudos go to Savannah Harris, who delivered the Agnus Dei's famous timpani part with particular aplomb.