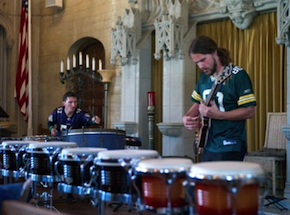 The San Francisco Contemporary Music Players has begun a new, occasional series of musical events featuring individual members of the ensemble acting as curators of concerts showcasing their activities and collaborations outside the larger ensemble. The inaugural concert, presented Sunday at the Center for New Music by guitarist David Tanenbaum, was offered as a celebration of the 80th birthday of Julian Bream, arguably the most influential guitarist of the 20th century, and was a demonstration of Bream’s success in making the guitar a vital part of the contemporary music world.

The evening featured performances by Tanenbaum and several of his protégés and former students from the San Francisco Conservatory of Music now performing in the groups Mobius Trio and The Living Earth Show. It was a dazzlingly diverse evening of music by Lou Harrison, Ronald Bruce Smith, Brian Ferneyhough, Luciano Chessa, Kevin Villalta, and Brendon Randall-Myers. The sound world was enriched by the variety of guitars, ensembles, and techniques on display: a new National steel guitar with a just-intonation fretboard invented by Lou Harrison, a traditional classical guitar integrated with live electronics, a traditional guitar trio playing music that bristled with inventive extended techniques, and an electric guitar and percussion duo.

The 20th century’s seminal guitarist, Andrés Segovia, was a brilliant and visionary musician with conservative musical tastes who created worldwide interest in the classical guitar. Bream’s great accomplishment was to establish a reputation with an audience that demanded Albéniz and Ponce while introducing a progressive approach to repertoire with a series of groundbreaking collaborations with such great modernist composers as Benjamin Britten, Hans Werner Henze, Toru Takemitsu, and William Walton. David Tanenbaum is in the forefront of a generation inspired by Bream and is one of today’s most accomplished champions of new guitar repertoire.

Lou Harrison’s Scenes from Nek Chand was written for Tanenbaum in admiration of the wonderful sculpture and architecture made of discarded material by the Indian artist Nek Chand. The National steel guitar, popular in Harrison’s youth, makes possible beautiful sliding effects between notes while the added just-intonation highlights unusually expressive destinations. Tanenbaum sensitively projected the longing and nostalgia inherent in Harrison’s late-in-life evocation of the remembered sounds of his childhood.

The Mobius Trio are getting rave reviews from guitarists around the world for their dramatic performances and their bold commitment to commissioning new repertoire.

Ronald Bruce Smith’s Five Pieces for Guitar and Electronics uses the traditional classical guitar in combination with a computer program that reacts to and alters the music played by the guitarist. It begins with a brilliant toccata movement that reaches a climax with three swirling lines interacting with Tanenbaum’s brilliant original. The other movements include references to traditional guitar music of the Middle East, Spain, Brazil, and Greece, along with inventive, smoothly integrated electronic effects that Tanenbaum controlled with a foot pedal, adding expressive depth.

The Mobius Trio — guitarists Robert Nance, Mason Fish, and Matthew Holmes-Linder — have been mentored by both Tanenbaum and Sergio Assad, and they are getting rave reviews from guitarists around the world for their dramatic performances and their bold commitment to commissioning new repertoire. (Their first recording, in full disclosure, includes a piece written by my son the composer Matthew Cmiel.) On Sunday they began with Kevin Villalta’s Witch Wagon, a musical retelling of a ghostly Salvadoran folk tale. An immoral man is cursed to wander for eternity with his wagon and oxen. The sounds, noises, and rattling of his cart were created by Mobius using capos, variously pitched percussion, string bends, and crossed strings both plucked and strummed with fingers and picks. Villalta’s piece brought us an engaging sound world and a lovely folk tale, all tied together in a satisfying narrative arc.

Living Earth Show performs from memory with an almost choreographed physical interaction … in their compelling performance.

Brendon Randall-Myers’ Making Good Choices has an energy and complexity with roots in the composer’s experience playing in hardcore punk and math rock bands. The first movement, called “running with scissors,” is imbued with a rhythmic energy reminiscent of Stravinsky and was played with sharp precision by the Mobius. The second movement, “following directions,” was spacious and made effective use of string noise, color changes, expressive vibrato, and unmeasured rhythms. The final movement, “hanging on for dear life,” combined the rhythmic energy of the first movement and the colorful spaciousness of the second in a compositional tour de force to which the Mobius responded with a ferocious virtuosity.

The Living Earth Show began its set with Brian Ferneyhough’s Renvoi/Shards, a piece written in 2008 for quarter-tone vibraphone and quarter-tone electric guitar. Ferneyhough is known for the extreme complexity of his musical notation, so involved that he does not expect any performance to accurately communicate all the information in the score but instead hopes that the intensity of concentration asked of the musicians will result in a thrilling musical performance. There is no denying that guitarist Travis Andrews and percussionist Andrew Meyerson did the ultimate to meet those expectations.

I’ve seen the score and know of the hours of preparation necessary to master even a few seconds of the 10-minute piece. Add to this the fact that Living Earth Show performs from memory with an almost choreographed physical interaction, and you’ll have some idea of their compelling performance.

I can’t think of a region in the entire world that has a guitar scene as vibrant and diverse as the San Francisco Bay Area. Everyone can be heard here.

Luciano Chessa’s The Captain’s Testament is a meditation on Chapter 32 of Herman Melville’s Moby Dick. The piece included a demonstration and picket line outside the theater, where performers with signs and bullhorns chanted lines from the novel, as well as an additional performance inside the theater for electric guitar and vibraphone with performers dressed in overalls and Jeep caps and playing their instruments with both traditional techniques and electric toothbrushes. The relationship of the music to the texts wasn’t clear to me, yet there is no doubt The Living Earth Show gave a committed performance and added significant, if little understood, drama to the performance.

I can’t think of a region in the entire world that has a guitar scene as vibrant and diverse as the San Francisco Bay Area. Everyone can be heard here, from the world-class artists regularly presented by San Francisco Performances and the Omni Foundation, to the regional and emerging artists presented by the Sacramento and South Bay Guitar Societies. David Tanenbaum and the San Francisco Contemporary Music Players, by fostering new talent like the Mobius Trio and The Living Earth Show, have brought this exuberant openness to a new level.