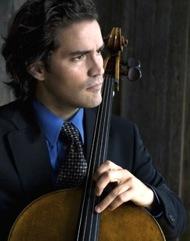 Softly It Goes at the Marin Symphony

The Marin Symphony ended its 74th season Tuesday at the Marin Center in San Rafael with a grand concert that included two old masterpieces and a new composition by Juilliard Composition Professor Behzad Ranjbaran. Commissioned as part of the Magnum Opus series, in conjunction with the Santa Rosa and Oakland East Bay symphonies, Ranjbaran’s Mithra depicts the ancient Persian god of the sun. The main protagonist is voiced by the flute (played here in a compelling rendition by Linda Lukas), in a meandering line out of the peaceful desert mountains. But soon, the sun-god is angered as the orchestra raises a storm of mythological proportions. Fanfares blare and cymbals heave divine sighs that outshine the entire sonic texture at their blinding peaks.

For much of the piece, Ranjbaran uses Middle Eastern–flavored modes, rhythms, and phrasing to evoke a pre-Zoroastrian atmosphere. In the program notes, he alludes to traditional Persian instruments such as the derazney (a kind of alpine horn) and the zither (a small, harplike instrument). But even though it was played on classical Western instruments with classical Western technique, and written in Europe’s notation system, it’s difficult to escape that Romantic orchestral sound we know and love. Especially in some of the harmonized sections toward the end, when the deity calms down and assumes a loving mood, the music, though beautiful, struggles to keep its identity: Instead of sounding like the music we might imagine issuing from the temple of Mithra, it becomes the score for an envisioned Hollywood film set in that temple. True, it’s difficult for classically trained composers to resist harmonization and complexity, because they’re taught to revere them. But sometimes less is more; this piece was most convincing at its simplest.

Also on the program was Dvořák’s monumental Cello Concerto in B Minor, with Zuill Bailey as soloist. This piece is known not only for its virtuosic runs but also for its deep pathos. It is also known for balance issues. The problem is that the orchestra is huge, and notated with a lot of mezzopiano and mezzofortes. Add to these difficulties the fact that the cello lacks the piercing brightness that enables instruments such the violin or the piano to stand out from the orchestra in their concertos. And to these add yet another problem: the cavernous space of the Marin Center and the full house of sound-absorbing concertgoers (the latter being a good problem to have). Many cellists muscle their way through this piece, battling the orchestra to make themselves heard — but not Bailey.

An interview with the cellist

As if playing for himself rather than a crowd of thousands, he refused to push his sound beyond the level where he wanted it, relying instead on nippy articulation to cut through the texture. He gave new meaning to the ricochet technique, bouncing from string to string with extraordinary speed and crispness. Yet even in the ninth row, I often yearned for a little bit more sound. Despite Maestro Alasdair Neale’s incessant waving of his palms to dampen the players, the wind section could not be hushed sufficiently, in parts.

Listeners who have become accustomed to recordings in which the soloist is unnaturally amplified (and given an imposing presence above the orchestra) may expect that the soloist in a live performance will be heard throughout the piece. Yet Bailey’s humbling interpretation got to what the concerto is really all about: the individual vs. the many. A concerto is a narrative in the first person: The soloist converses, battles, or dances with those around him or her. Sometimes we listeners simply get lost in the crowd, drowned by the masses. Bailey accepted that with a smile. (What’s the point of beating a cello senseless in an attempt to outdo a slew of woodwinds, horns, and trombones?)

Though epic is a word that’s tossed around frequently, few pieces of music are as epic as Brahms’ First Symphony, which Marin tackled next. Neale led his orchestra with a passionate conviction that captured the ensemble’s energy, producing a stunning first movement. The middle two movements, pastoral and gorgeous though they are, are often overlooked; in fact, there were a few problems of ensemble coordination. The miniature violin/horn concerto that comes at the end of the second movement was given a beautiful reading by Concertmaster Jeremy Constant and horn player Darby Hinshaw. (Both also made noteworthy solo contributions in the Dvořák.)

In the introduction to the last movement, Neale held off the pizzicato accelerando for an unconventionally long time. It made for an interesting surprise, as if the orchestra were an elephant entering the room on tiptoe. When the famous theme finally came — the moment I was waiting for, all symphony long — the strings produced an incredibly rich sound, like good dark chocolate.

At the program’s conclusion, Neale touchingly honored cellist Chris Jennings, in her last appearance with the Marin Symphony, before retiring after 44 years with the orchestra. She was given a standing ovation.