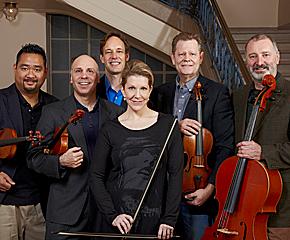 Into the Soul of Camille Claudel

Camille Claudel may be an ideal subject for operatic treatment. The French artist (1864–1943) spanned two centuries, created a significant body of work, loved passionately, and died tragically. Not since Floria Tosca has a woman seemed so ripe for dramatization.

Jake Heggie — who, in addition to being one of the finer composers of his generation, has an unerring sense for what works on the musical theater stage — apparently thinks so, too, and he may yet compose an evening-length work on Claudel.

In the meantime, a fortunate crowd packed Herbst Theatre Saturday evening to hear Heggie’s Camille Claudel: Into the Fire, a new song cycle for mezzo-soprano and string quartet that depicts Claudel in seven brief but potent episodes. Commissioned and presented by San Francisco Performances, the premiere featured mezzo Joyce DiDonato, accompanied by the Alexander String Quartet, in a moving, stunningly beautiful performance.

Claudel is perhaps best known today as the lover of French sculptor Auguste Rodin. But she was also a fiercely original artist, one who lived in an era that didn’t acknowledge women as capable of producing great art (Saturday’s program, which included images of Claudel and her work, attested to her skill). Her love for Rodin was both a blessing and a curse: Although he was her teacher, and she his muse, their relationship was turbulent. Eventually diagnosed with mental illness, she was confined to an institution, where she spent the last years of her life in isolation.

Heggie has made the cycle a glowing showcase for the vocalist.

In the new cycle, Heggie and his librettist, Gene Scheer, trace Claudel’s life through a fluid set of songs conjoining her obsession with Rodin, her love for art, and her search for identity, creating an indelible portrait of a woman of deep sensitivity, longing, and sorrow (“Allow me to forget,” she sings, “that every dance of love is mingled with regret”).

As he has done for singers throughout his career, Heggie has made the cycle a glowing showcase for the vocalist. The writing for quartet — filled with insinuating themes and deft harmonies — sets the stage, but never intrudes. And the vocal parts are brilliant: spare and pristine in several settings, luxuriantly ornamented in others. This is a work that sings, ardently, melodically, and dramatically.

Cries From the Heart

DiDonato proved an ideal interpreter. With the first song, “Rodin,” the mezzo established Camille’s voice with pure tone and crisp articulation, summoning a haunting sense of anguish and rendering the printed texts superfluous. “La Valse,” sung over the strings’ fleet, agitated lines, brought a soulful cry for consolation. DiDonato’s finest moments came in “Shakuntala,” a great aria of regret and remembrance; here, the mezzo’s voice rose in urgent flights as Camille grasps for fragments of her identity.

In the remaining songs, Heggie and Scheer focus on the pathos of Camille’s retreat into madness. In “La petite Chatelaine” she sings to her lost child, describing herself as a mother to “children of stone”; DiDonato advanced the text softly over a delicately etched melody. In “The Gossips,” DiDonato floated exquisite tone on the “whispers” of the quartet’s fleet, incisive lines. The subsequent instrumental interlude, “L’Âge mûr,” deploys a dark, drifting music, perhaps to illustrate Camille’s final break with Rodin. The cycle ends with an Epilogue, called “Jessie Lipscomb visits Camille Claudel, Montdevergues Asylum, 1929.” Here, Camille reclaims a measure of her youthful poise and sweetness, and DiDonato’s performance was suffused with deep feeling.

Heggie and DiDonato opened the program’s first half with a beguiling performance of Reynaldo Hahn’s Venezia. Many artists have assayed these quintessential French songs composed in homage to Venice; baritone Christopher Maltman sang them beautifully on this very stage just last month. Still, I don’t think I’ve ever heard them sung with such allure as DiDonato did on Saturday. With Heggie supplying subtle accompaniment, her pristine diction and honeyed tone made them sound newly minted.

Bridging the two song cycles was Debussy’s String Quartet in G Minor, in a lithe, agile performance by the Alexander String Quartet. The quartet, which celebrates its 30th anniversary this year, sounded especially lovely in the third movement (marked “Andantino doucement expressif”), with the strings producing richly colored, shimmering sound. In her prefatory remarks, S.F. Performances Director Ruth Felt linked the work to Camille Claudel; Debussy, she noted, was a friend to the artist, and kept her sculpture of “La Valse” on his mantel until the day he died. All the evening’s performers returned for the single encore, a radiant traversal of Richard Strauss’ Morgen!