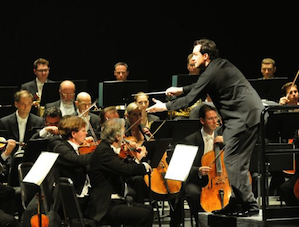 Spellbinders From the Vienna Phil

Unquestionably, Andris Nelsons was the hero — the well- and justly-celebrated hero — of the Vienna Philharmonic Orchestra’s residency this week at UC Berkeley, presented by Cal Performances. At hardly more than a day’s notice, he substituted for an ailing Franz Welser-Möst and conducted the orchestra in Sunday afternoon’s concert at Zellerbach Hall.

Nelsons was available for this exacting task because he was already scheduled to lead the Viennese in a different concert on the previous evening. I missed that one, though I’m told that its Haydn and Brahms program was a huge success. So, I’m pleased to report, was Sunday’s.

Don’t mistake this, though, for a star-forging debut like the occasion when Leonard Bernstein made his name taking the baton of the New York Philharmonic from the ailing hands of Bruno Walter in 1943. Nelsons, a Latvian by birth and training, is already well-known internationally. Celebrated as music director of the City of Birmingham Symphony Orchestra for several years, he is now the music director designate of the Boston Symphony, taking over officially next season. This weekend’s concerts offered a good opportunity for Bay Area audiences to fasten our ears on him.

The program that Nelsons inherited from Welser-Möst included slightly lesser-known symphonies by two of the greatest Viennese masters. Mozart’s Symphony No. 28 in C Major, K. 200, poised on the edge between his “storm and stress” and galant styles, leaned in this performance toward the galant. The color of the lower strings, the mixture of strings and winds in typically curvaceous Mozartean passages, the horns at the end of the first movement, and the tremolo in the slow movement — which Nelsons conducted in a literal fashion, by wagging his stick — all made for delightful elegance. The finale, however, was slow to get going, and awkward where it should have been fleeting.

Bruckner’s Symphony No. 6 in A Major, often lost in the gap between his more-famous Fourth and Seventh Symphonies, doesn’t deserve its obscurity. Although nearly an hour long, it’s actually his most concise symphony, and probably his brightest and most emotionally cheerful, as well. As with all Bruckner symphonies, the essential element in a successful performance is the overall shaping of the work. Here the slow movement was the most profound. Rich, layered sound from the varied string sections — the Viennese violas and cellos have a pronounced sinew to them — formed the basis of the movement. Nelsons slowly, steadily, inexorably built a cathedral of sound.

Rich, layered sound from the varied string sections … formed the basis of the movement. Nelsons slowly, steadily, inexorably built a cathedral of sound.

The large first movement of the Bruckner approached the same standards more diffusely. Subtle buildups led to motionless stasis points on “held” harmony. This treatment of this kind of music probably appeals most to listeners who already appreciate Bruckner’s slow processes. Certainly I’m one such, and there seemed to be many of that persuasion in the audience. The scherzo alternated thunderousness in its outer sections with coyness in the trio, and the finale, beginning with startling brass cries injecting energy into another contemplative string theme, moved inexorably along to its conclusion.

Much of Bruckner’s richly thick, organlike orchestral style could be heard in the Vienna’s performance: lyrical cello themes, bright brass calls. The huge tuttis, however, ran straight into the brick wall of Zellerbach’s acoustics, or lack of them. The Vienna Philharmonic ought not to sound brittle or tinny, nor should its monumental effusions vanish without reverberation the instant that it stops playing.

Nelsons conducts in a great variety of styles. A fairly big man, he wears his size lightly. Shifting between using a baton and holding it aside, sometimes he leaned over his music stand, focusing attention on a wind or brass soloist. Sometimes he shifted his entire body around to express his meaning. Sometimes he just stood there and let the musicians play without him. He conducted the entire concert with scores — though, considering how often he hastily flipped pages back and forth, it’s doubtful how much he really needed them.

There was more to the Philharmonic’s residency than the three main concerts, including seminars and talks … doing some deep probing into the orchestra’s troubled world-war-era history.

In place of an originally scheduled neo-Schoenbergian work by the contemporary Austrian J.M. Staud, a specialty of Welser-Möst’s, Nelsons gave added value of a large encore in the form of Josef Strauss’ Delirien-Waltzer, Op. 212, a full set by the waltz king’s brother that’s notable for an almost Brucknerian tremolo introduction, presumably representing the delirium of the title. This was followed by an encore’s encore: a quick galop by another Viennese composer of the period, Joseph Hellmesberger, Jr.

There was more to the Philharmonic’s residency than the three main concerts, including seminars and talks with orchestra representatives, UC professors, and others, doing some deep probing into the orchestra’s troubled world-war-era history. I attended two musical events at Hertz Hall on the Berkeley campus. On Saturday, Lydia Rathkolb, a soprano from the Vienna State Opera, the Philharmonic’s parent organization, sang with operatic grandeur a set of 20th-century Austrian lieder, beginning with Alban Berg and continuing to younger, less stridently modernist composers like Erich Wolfgang Korngold. Following this, a sextet of Philharmonic string players, led by Rainer Honeck, who served as concertmaster for the Bruckner and Strauss, gave a wiry, expressionist performance of Schoenberg’s early Verklärte Nacht, almost canceling out the following speaker’s contention that Schoenberg’s later atonalism was historically necessary.

On Friday, Honeck coached the string players of the UC Berkeley Symphony for this coming weekend’s performance of Shostakovich’s Symphony No. 10, instructing them in playing legato without lunging, and in the technique of bright, clear pizzicato — just the way he and his colleagues went on to demonstrate it in the trio of Bruckner’s scherzo.