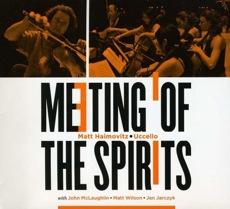 In February, if this album garners the Grammy it’s been nominated for, it will not only properly reward Matt Haimovitz and his self-described big band of cellos, it will also help legitimize the concept of the award category “Classical Crossover.” Classical musicians have made numerous attempts, in recent years, to step over assumed genre boundaries into jazz, rock, and world musics — some of them even managing to make it to the Grammys. But unlike most, this showcases both classical training and experience, of Haimovitz and his group of students from McGill University’s Schulich School of Music (under the group name Uccello), and the beauty and integrity of the visited genre, manifested here in a delightful sampler of jazz forms. Under the sure guidance of arranger (and composer of one track) David Sanford, none of this sounds awkward or cutesy, though much of it is entertaining.

Guitarist John McLaughlin joins the cellos on Open Country Joy, the opener, which he’d introduced with the Mahavishnu Orchestra during the early days of jazz fusion, in the 1970s. Here and on the title track, Meeting of the Spirits, another dense and complex McLaughlin composition, Uccello’s audible enthusiasm keeps spirits high. Occasional quickened bursts of energy, evocative of North Indian classical music, display just how tight this ensemble keeps itself.

Matt Haimovitz: Crossover Cellist Up for a Grammy

Sanford, says Haimovitz, is to be credited for echoing the dreamy harmonies of modern jazz arranger Gil Evans on Miles Davis’ Half Nelson, one of the tracks on which Uccello more obviously resembles a big band. To best assume the roles of this kind of ensemble and the physical and acoustic variety of its brass, reed, string, and percussive instrumentation, Haimovitz has encouraged his students to fully explore the sonic possibilities of their cellos, through bowing and plucking techniques and by tapping on their instruments’ bodies. It sounds right, not annoying.

With W.R.U., Uccello takes on the idiosyncratic “harmolodic” and rhythmic vision of jazz composer Ornette Coleman, and again manages to not sound undone by the challenge. The excitement is embellished with pyrotechnic solos by guest drummer Matt Wilson (who also appears, with keyboardist Jan Jarczyk, on the title track). A charming shift toward mainstream jazz follows with Blues in A Minor, written by the Modern Jazz Quartet’s John Lewis. In On Blood Count, the last piece written by the dying Billy Strayhorn for the Duke Ellington Orchestra, Uccello gently swings in emotionally affecting fashion.

Triptych is an opportunity for David Sanford to showcase his own boundary-busting approach to composition — not the first time he’s done this for Haimovitz. Uccello embraces the muscular and propulsive piece, suggestive of Stravinsky but with imaginative modern effects. With tasteful programming, there’s then a flashback to an earlier jazz age in a lighthearted reading of George Gershwin’s lovely Liza, à la the 1930s Hot Club de France. As elsewhere on the album, the smart delegation of roles among the ensemble are on display, with one cello executing a pizzicato invocation of guitarist Django Reinhardt’s original solo, and another bowing along with the departed spirit of violinist Stephane Grappelli. It’s great fun, including the sneaky quote from the pop ballad Mona Lisa.

The late Charles Mingus, a jazz giant who studied cello as a youth and sought concert hall cred, is probably relishing this presentation of his Haitian Fight Song. His rich compositional colors are artfully distributed among these cellos, and there’s no diluting of Song’s gutsy, rather subversive intent. A great ending to this album, it leaves us cheering for that Grammy — and for more quality crossover.