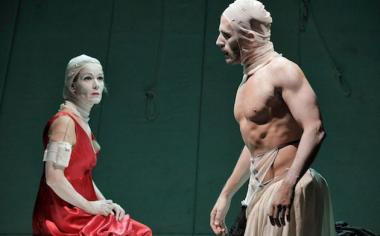 Whatever happened to Italian opera? After inventing the art form and dominating the repertoire for over 300 years, the nation suddenly seemed to fall silent at the beginning of the 20th century. Can you name a major Italian opera composed after 1926’s Turandot that is regularly mounted today?

While the Romantic tradition of Rossini, Donizetti, and Verdi may have died with Puccini, Italians never stopped composing. In the post-WWII era, Bruno Maderna, Luigi Dallapiccola, Luigi Nono, and Luciano Berio pressed the restart button on Italian opera with daring works of experimental music theater. And now a younger generation — led by Giorgio Battistelli, Salvatore Sciarrino, and Luca Francesconi — has established itself as the new face of Italian opera. It’s likely that you have never heard of them, because their works — like those of so many contemporary European composers — are rarely performed by American ensembles, which tend to locally source their commissions.

That’s why I’m so enamored with West Edge Opera’s recent programming choices. The company has been bravely tackling the kinds of works that are making a stir across the Atlantic, but rarely get produced in the U.S. After staging British composer Thomas Adès’s Powder Her Face (1995) two years ago, the festival featured Francesconi’s equally provocative Quartett (2011) this season, which opened at Richmond’s Craneway Conference Center on Saturday in its West Coast premiere.

Quartett, like Powder Her Face, examines the moral debauchery of a decaying nobility. The opera’s libretto is an English translation of a 1980 avant-garde theater piece by East German playwright Heiner Müller, which is itself an adaptation of Pierre Choderlos de Laclos’s 1782 novel Les Liaisons dangereuses. In spite of the title (which includes an extra “T” in reference to the German spelling of Müller’s play), the opera is scored for only two onstage soloists. The Marquise de Merteuil and her former paramour, the Vicomte de Valmont, play a twisted role-playing game in which they act out sexual scenarios involving the lovers Valmont pursues in the original Laclos. For much of the opera, then, the singers engage in an odd ménage à quatre pour deux as the two aristocrats double as various secondary personas (hence the “quartet” of the title).

The notorious fellatio number from Powder Her Face is relatively tame compared to what transpires in Quartett. The pair attempt to outdo each other with increasingly filthy remarks that culminate in a series of blasphemous double-entendres. “Have I shocked you?” asks Merteuil at one point. But it’s not so much the duo’s pornographic dialogue that shocks in Quartett — 21st-century audiences are largely immune to this kind of potty talk. Rather, what’s so disturbing about the opera is the sick powerplay that unfolds between the two characters, escalating from mild teasing, to psychological abuse, to sexual violence, and a final act of murder. In lieu of a traditional plot, Müller’s enigmatic text penetrates deep into the foul crevices of human nature.

With his score, Francesconi evokes the writhing maggots of corruption that lie just beneath the character’s genteel façades. In the work’s instrumental interludes, painfully high and dissonant string clusters clash with violent tangles of contrapuntal lines — piercing piccolo, slashing brass, pummeling percussion — that teeter on the brink of chaos. Opera buffa-style harpsichord arpeggios introduce the couple’s perverse pantomimes, which are backed by grotesque dance parodies or colorful collages of sarcastic instrumental sound effects. The Festival Orchestra navigated Francesconi’s neurotic sound world with virtuosic agility, and conductor John Kennedy even sustained a high degree of textural transparency in a score that could easily curdle into lumpy mess.

At certain points throughout the opera, however, this brutality would give way to unexpected passages of intoxicating sensuality. Soft string harmonics, punctuated by rising piano and harp flourishes on the exotic-sounding augmented scale, conjured an atmosphere of mystery and eroticism. This perfumed sonority accompanied moments of vulnerable introspection for Merteuil and Valmont, in which they reflected on the terrifying truths staring back from the mirror: their fading beauty, their inevitable mortality, and a representation of the soul as a monstrous creature without a face.

While we heard the voices of soprano Heather Buck and baritone Hadleigh Adams during these arias, neither actually opened their mouths to sing. Much of the vocal material in the opera, including the character’s inner dialogues, is prerecorded and played back with echoey filtering that aurally suggests a state of interiority. Elsewhere, as the soloists took on roles of the opposite gender, their live voices were artificially heightened or lowered, resulting in an uncanny half-human, half-machine hybrid. Francesconi also produced a creepy musique concrète soundtrack that integrates samples of a snarling animal and the castration-anxiety-inducing sound of snipping scissors.

The electronics offer a distinct advantage for a small company like West Edge Opera. Although Francesconi scored Quartett for much larger forces, the reduced version heard Saturday replaces the chorus and the larger of two orchestras with a prerecorded track of ensembles from La Scala, where the work premiered. Unfortunately, this piling on of digital layers had disastrous consequences. The Craneway Center, a former Ford assembly plant, is not acoustically equipped for an opera of such technological complexity. Whatever sound system West Edge Opera cobbled together was a disservice to their musicians. I felt like I was listening to a bootleg recording through a tin can the whole evening. The singers, who were amplified, were either too loud or too quiet, and it was impossible to understand their electronically garbled diction. In the future, I would implore West Edge Opera to ditch the abandoned train stations and factories in favor of a good-ol’-fashioned theater where these problems can be better managed (preferably one more centrally located in the Bay than Richmond). The company’s trademark “edge” should come from their adventurous programming and productions, not trendy venues.

Even as they battled against this muddled audio mixing, the two leads were able to pull off brilliant performances. Buck effortlessly scaled the Marquise’s uncomfortably high tessitura, tapping into the Italian lyricism latent in Francesconi’s vocal writing. Maintaining a silvery tone, the soprano ascended in long, bel canto-style phrases that peaked in orgasmic climaxes. Most impressive was her ability to communicate the stark change in Merteuil after her character is savagely raped by Valmont. Donning a crimson dress in the last scene — the only bit of color amongst Christine Crook’s Mardi Gras-ball costume designs — Buck transformed from an ennui-laden coquette to a powerful, vengeful virago.

As Valmont, Adams slowly descended into lecherous madness over the course of the evening. By the end of the opera, he was half-dressed and drunkenly teetering on a single high heel. I’m beginning to suspect Adams doesn’t sign a contract unless it stipulates that he appear shirtless in the production, but at least the barihunk has a brawny voice to back up his toned physique. His final solo was an unsettling display of hysterics — imposingly perched atop a banquet table, Adams leaped erratically between roaring chest voice and shrill falsetto. But as his character succumbed to the poison Merteuil slipped him, the baritone softened to a pathetic gasping to deliver a line filled with spiteful irony: “It’s good to be a woman and not a winner.”

Elkhanah Pulitzer’s production was a tad lackluster compared to the scintillating and intelligent Powder Her Face she directed for West Edge in 2016. Her incorporation of iPhones to emphasize the protagonist’s Kardashian self-obsession was too obvious, though the ghostly negatives of their selfies projected on the ramp lent a spooky touch. I also appreciated Pulitzer’s thought-provoking staging of the rape scene, given the risks she took in handling this sensitive subject; during the interlude that followed the attack, Valmont and Merteuil switched roles and replayed the events at double-speed under a strobe light. This slapstick, Charlie Chaplin rendition came across as a biting commentary on society’s tendency to treat sexual assault with too much levity.

Jim French cleverly traced the opera’s ritualistic structure with his elegantly simple lighting: A dreamy, purple glow illuminated the principals during their pre-recorded monologues, for instance. Particularly dramatic was the way French back-lit the stage with glaring fluorescent tubes at the end of each scene; Buck and Adams, abruptly confronted with the presence of an audience, would recoil in self-disgust.