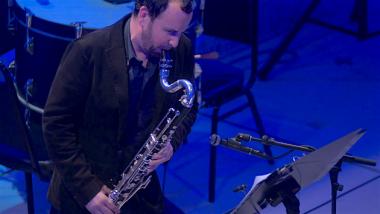 A concert by the International Contemporary Ensemble (ICE) lets you check in on what young and youngish composers are up to. In their Friday night concert at the San Francisco Conservatory, five ICE performers presented five compositions completed in the last five years. With a few truly interesting moments as exceptions, this sampling often felt like a lukewarm aesthetic homeostasis built of fragments and extended techniques. But regardless of aesthetic judgements of the works, the ICE musicians gave impeccable and committed performances.

The most convincing piece was Anna Thorvaldsdottir’s Sequences from 2016 for bass flute (played by Isabel Gleicher), bass clarinet (Joshua Rubin), contrabassoon (Rebekah Heller), and baritone saxophone (Ryan Muncy). Starting with a breath-focused, extended technique section, which seems to be a requisite of many new works, melodic fragments eventually emerge, especially for the bass flute. A low-pitched, two-note ostinato growls out of the deepest registers in the ensemble, with the warm timbre of all the low winds and slowly rolling ostinato leading to a trancy, out-of-time experience.

Mario Diaz de Leon’s Mysterium also had neat moments: some cleverly crafted masking effects where a burst of instrumental and electronic activity clarified into just the electronics and, near the end, an electronic groove ping-ponged in stereo between the stage speakers, accompanying frenzied flourishes from the instrumentalists.

Abondono’s solo bassoon composition gave Rebekah Heller bit after bit of extended techniques to execute. The list included sounds of imitated guitar distortions, the fast bopping of double-reed tonguing, and something like sea mammal calls, all inspired by an epigraph from Virginia Woolf’s Mrs. Dalloway. The piece left me with a desire to read Woolf’s novel and the sounds were often interesting in and of themselves, but their procession grew tiresome quickly.

Blecharz’s work also employed short, bursts of activity. The most interesting thing about the piece was its backstory, as delivered by Ryan Muncy: Blecharz took real-life, break-up monologue material left in his voicemail and translated it into notes and rhythms for accordion reed box and baritone saxophone without a mouthpiece. Like Abondano’s piece, intriguing compositional motivations and effects did not justify the duration of the compositions.

Perhaps the “newest” thing on this new music concert were the 3D-printed speakers used in Seth Cluett’s a state of mutual tension, which received its world premiere. If I understood correctly, the sounds from one instrument could be played into another instrument’s speaker, embedded in the bell or end of each instrument. Intended as an exploration of music as a microcosm of nonverbal communication, the effects of the speakers and the theme were rather imperceptible to me. There were some beautiful sounds involved: swaying between chords, like a loud Morton Feldman piece at times, and some temporal extensions of select notes from a chord à la Steve Reich’s Four Organs.

Even if there were no new compositional techniques or previously unheard sounds there was still new music, pieces hard to hear elsewhere, let alone live. And the performers, dressed in the seemingly standard new-music drag of artsy business casual, were always on point. Go to the next ICE concert, not hoping to fall in love with every piece, nor to hear the cutting edge of the Western Classical new music subculture, but to encounter new works and new composers. With that mindset you won’t be disappointed.