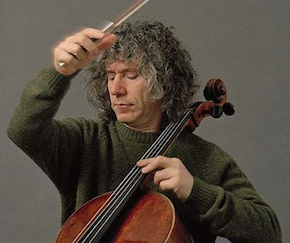 Bookended by two playful Haydn symphonies, Isserlis’ contribution to the performance consisted of two concertos for violoncello, by Luigi Boccherini (1743–1805) and by Carl Philipp Emanuel Bach (1714–1788).

Many parallels can be drawn between Bach’s concerto in A Major and Boccherini’s concerto No. 7 in G Major. Both were composed in the second part of the 18th century (the Bach in 1753, the Boccherini a bit later); both have a traditional three-part structure with a slow central movement; and the internal configuration and thematic development of each part adheres very much to the compositional conventions of the day.

In spite of these and other parallels, each concerto exudes a totally different feel; the Boccherini is essentially a chamber music piece, while Bach uses a larger ensemble with strings and continuo. And where C.P.E Bach’s imaginative concerto clearly points forward in time, with its unexpected rhythmic and melodic twists and turns, Boccherini anchors himself quite firmly in the style of his musical predecessors. He uses a much more traditionally “Baroque-y” vernacular and expresses the various emotions in his concerto in a reserved, regulated manner.

In his brief postintermission talk, Isserlis referred to the Boccherini concerto as “Music of Angels.” This was a perhaps unintentional reference to PBO’s principal bassist, Michelle Burr, who died in September. According to the “In Memoriam” note in the program guide, her trademark encouragement to colleagues before going onstage was “Play like an angel”; PBO’s October concerts are dedicated to her memory.

With Isserlis’ unbridled musical fervor and his soft, lustrous tone came the added benefit of closely observing the musicians in their perfect little microcosm.

Isserlis had already displayed some extraordinarily angelic playing before intermission, in Bach’s concerto. After a bright and upbeat opening Allegro, he painted the meandering melody of the Largo in such magnificently mournful colors that the ensuing Allegro assai finale was greeted with an audible sigh of relief from the audience.

The Boccherini concerto included a similar, contrasting tension-and-release sequence between the central Adagio and the final Allegro. With Isserlis’ unbridled musical fervor and his soft, lustrous tone came the added benefit of closely observing the musicians in their perfect little microcosm, with the minute interactions between soloist and accompanying ensemble changing direction and focus from phrase to phrase, sometimes even from note to note.

Isserlis rewarded the audience’s grateful enthusiasm with a ditty by Dmitry Kabalevsky (1904–1987), a funny and entertaining musical morsel that he seemed to make up on the spot.

To open and close PBO’s concert season opener, Music Director Nicholas McGegan had selected two of Joseph Haydn’s symphonies, No. 57 in D Major and No. 67 in F Major.

Regardless of a few noticeable intonational fluctuations in the early part of the program, the always engaging McGegan guided his musicians along the many delicate and charming little surprises of Haydn’s lighthearted and cheerful symphonies with his usual infectious enthusiasm.