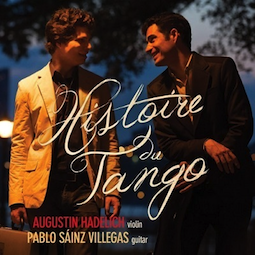 Ástor Piazzolla occupies a programming sweet spot. It’s a corner of what you might call the “nonthreatening recent-ish art music” niche: nothing to frighten the horses or the donors, recent enough to count as “contemporary,” and with enough “authenticity” cred and musical sophistication that it can’t be derided as either Anglo rip-off or crossover pap. It happens also to be delightful stuff, though my appetite hasn’t quite kept up with the classical music world’s own over the two-plus decades since Piazzolla’s death in 1992.

Piazzolla’s Histoire du Tango, from 1986, is a four-movement piece originally for flute and guitar, but at least as often played with other combinations now. Here it’s the “centerpiece” (per the program note; actually it’s the lead item) in a violin and guitar recital by Augustin Hadelich and Pablo Sáinz Villegas. The movements depict the evolution of the tango, from the bordellos of Buenos Aires more than a century ago, to a 1930 café, to a 1960 nightclub, and then to the concert hall of the mid-’80s. The rough trajectory: somewhat bawdy dance music; wistful and seriously lovely tunes, without any of that rude kick in them; rude kickback, with a vengeance; and “Hey, let’s keep the rude kick, and throw in some interesting jaggedy melodic lines, just for fun.” No mockery, here: Fun it is.

There are voluptuous moves in this music, yet not a conspicuously voluptuous sound. Hadelich is edgy, often even violent, in places, and — in the second movement of the four (“Café 1930”) — tender and capricious at once. Still, this is not the place to look for the classic, clotted-cream “café violinist” sort of tone.

Some might miss it. I don’t, much. There’s a good deal of delight here in the articulation and the rhythmic swagger. Hadelich has particular fun with an effect in two movements of the Piazzolla that may or may not have a technical name. Basically, you press so hard with the bow on the string, and move the bow so slowly, that what results isn’t a pitch at all, but an indeterminate, low-pitched rasping noise. (It’s a favorite of teenage string players when they discover it, something like the interesting rude noises bassoonists learn to make with their reeds and trombonists with their mouthpieces.)

From there, it’s all earlier music. For some reason Hadelich and Villegas play only five of Manuel de Falla’s seven Canciones populares españolas (there was certainly room for the lot). But those that are here are vibrant, keenly inflected, and very well played indeed. I’d single out Villegas’ blistering accompaniment in the “Jota.”

And then from there back yet further, to Paganini. You might expect a massive virtuosity inflation, but actually you don’t get one, at first. The A-major Sonata here is, apart from an Italianate turn of melodic phrase, about the last thing you’d expect from Paganini. The violin part isn’t virtuosic at all, and the guitar part is its full equal. The nearest thing I can think of is Schubert’s violin/piano sonatinas: the same modesty of aims, the same melodic ease, the same division between the parts. All the Paganini violin/guitar music I’d encountered before has been all violin and no guitar, so to speak; Paganini was, by all accounts, a devoted and excellent guitarist, but when he pitted his secondary instrument against his primary one in a composition, it was generally a grimly unequal contest. Except this once.

Villegas is a fine partner all through the disc, especially in not being shy about behaving as Hadelich’s equal, both interpretively and volume-wise.

The Mosè Fantasia (a set of variations on a Rossini aria, to be played using only the lowest string of the violin) is another animal altogether. Paganini supposedly had the habit of deliberately snapping the other three strings, and playing this on the G string alone. I wish I had seen Hadelich do the same, because his tone at the top of the G string is so supple and sweet that a more cynical person might suspect a bit of D string in there somewhere. Might, that is, until listening to Pablo de Sarasate’s Zigeunerweisen, which closes the disc. After that, you have a very good idea how easily Hadelich gets around the instrument. There is, for example, a certain notorious bit of left-hand pizzicato (violinists will know the one I mean) where nearly everyone slows up, just a tad. Hadelich does not.

The arrangement of Zigeunerweisen (not credited in so many words in the notes), I would guess, is Villegas’ own. It works very well — any other violinists willing to play the work with that little cover ought to investigate it, especially if they happen to know a terrific classical guitarist. Villegas is a fine partner all through the disc, especially in not being shy about behaving as Hadelich’s equal, both interpretively and volume-wise. Neither of them is ever afraid to put some bite in the sound.