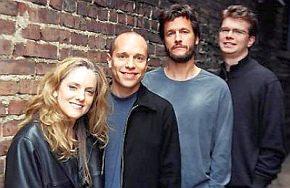 David Bratman on October 16, 2007
Stanford's Dinkelspiel Auditorium is not a large hall, but the St. Lawrence String Quartet played there on Sunday afternoon with a sense of intimacy worthy of a far smaller venue. Not that it couldn't be heard, or anything like that. The nearly full audience hung on every note. But the quartet proved that there are other ways to provide an exciting and moving chamber music concert than by letting all the stops out.

Start with the fact that Geoff Nuttall, the quartet's intense and demonstrative leader, was cast in two of the three works as the second violinist. If he's done this before, it was not at any concert I've attended. Some quartets, like the Emerson or the Orion, make a point of having their two violinists regularly switch roles. But most keep their players in the same seats. The St. Lawrence Quartet is doing something different, perhaps as an experiment. In parts of Beethoven's Quartet in A Minor, Op. 132, Nuttall seemed almost to be gritting his teeth as he tried to fit in to the more self-effacing second violin role. Yet even in Haydn's Quartet in C Major, Op. 54, No. 2, where he was first violin, Nuttall's solos went for a much smaller, humbler sound than his characteristic ebullient style.

The performers' approach was apparent from the beginning of the piece. Haydn's first movement opening theme is interrupted by long pauses, which, as often with Haydn, are the most important moments in the work. The St. Lawrence players came to these silences with an intriguing hesitancy, as if they were about to surprise even themselves with what was coming next. When the opening theme returns later in the movement, the first violin fills those pauses with tiny three-note motifs, and here Nuttall was at his most restrained, violating the silence with the smallest sound possible.

Meanwhile, Scott St. John, whom I once described as "a born second violinist," which I intended as a compliment, was trying out as first violinist in the Beethoven. He has a relatively deeper tone than Nuttall's, and he plays in a more restrained fashion. His solos in this work were part of the ensemble; he made no attempt to turn them into self-expressive showpieces. Late Beethoven quartets are generally treated as large, fearsome monsters. To most critics, they're all about their large, serious movements, and Op. 132 has, as its centerpiece, perhaps the largest and most solemn of them all. The shorter, lighter movements interleaved among them are considered almost embarrassments.

Another Take on Ludwig

The St. Lawrence turned this view of Beethoven inside out. The players found the "inner Op. 18" in Op. 132. (The six Haydnesque quartets of Op. 18 were Beethoven's earliest works in the genre.) Here the lighter side of the work carried weight. There can never have been a lighter, more charming performance of the trio in the quartet's second movement, its Mozartean cadences gently floating down. Even the rough sforzandos in viola and cello that abruptly break it off were gently handled.

The third movement, that central Adagio, is a hymn of thanksgiving for the composer's recovery from a serious illness. The hymn alternates with Andante episodes labeled "Neue Kraft fühlend," which in this performance could be colloquially translated as "I'm feeling much better today." These episodes made for sunny shafts in the solemn hymn, like the breaking of a fever. Silent pauses in the tiny fourth-movement march were treated as spots to stop and look around, as in the Haydn. Even the finale, in many hands a thunderous furiant, was light and gentle here, though also full of energy. Christopher Costanza's cello did not strain for its high-pitched theme.

The Haydn and the Beethoven came before intermission. Afterward came something entirely different: John's Book of Alleged Dances for string quartet plus prerecorded loops of prepared piano (serving as a rhythm percussion track for six of the 10 movements), by John Adams, who was present at the concert. It has nothing in common with Haydn and Beethoven except one key thing: a sense of humor. The movements have whimsical titles like "Toot Nipple" (an allusion to an E. Annie Proulx story) and "Alligator Escalator." Restrained from the deep sonority and harmonic resonance that characterizes his work with orchestra, Adams here exposes more of his minimalist roots. The string parts are often repeated loops as static as the prepared piano parts. Most of the movements end, in classic minimalist style, abruptly, even comically, with no harmonic resolution because there was never any harmonic movement to resolve.

What makes this piece work, if it is to work at all, is for the players to groove to the rhythm, whether accompanying the rhythm track or by themselves in the movements without one. They did well in the slow swing rhythm of "Rag the Bone" and in what the composer calls the "dry bones and hardscrapple attacks," rather like a Shostakovich scherzo, of "Stubble Crotchet." This last was violist Lesley Robertson's finest moment. Other parts were not so successful. Adams wrote the work in 1994 for the Kronos Quartet, and tailored the work for its particular style. The St. Lawrence, less ironbound performers than the Kronos, showed energy and skill in the "Dogjam" hoedown but didn't really cut loose there. And Costanza was unconvincing in the song of a budding teenage girl in the "Pavane: She's So Fine." Overall, though, this concert was a sterling exhibit of subtlety and charm in chamber music.