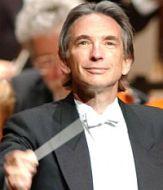 Heuwell Tircuit on January 23, 2010
Thursday’s program of the San Francisco Symphony, under Michael Tilson Thomas, offered something new in my concert experience. Noting that the two works on the first half of the program were rather glum, MTT said he wanted to open with something lighter. So he turned around and conducted what amounted to an encore: the sarcastic Polka from Shostakovich’s 1930 ballet The Age of Gold, Op. 22.

That the orchestra has ignored a composition as fine as Oceanides all these years is more than a little surprising. Of course, most of Sibelius’ tone poems are neglected these days, and not just here. Oceanides is wonderfully evocative of the sea waves’ glitter, highlighted by little chirping episodes in the woodwinds of the sort that also turn up in the composer’s Sixth Symphony and piano music. The music is primarily beautiful, with little overt flashiness, unlike Debussy’s blazing sea piece, La Mer.

The work was commissioned for Connecticut’s Norfolk Festival and premiered there, with the composer conducting. Only about 11 minutes in duration, the piece is set in a loose sonata-form, and marked a major step toward the orchestration of Sibelius’ late works. Oddly enough, it calls for two harps rather than one. And to begin with, Sibelius did not often call for harp at all in compositions, and this is the only one (I think) that needs two.

Oceanides proved such a big success at its premiere that Yale University awarded Sibelius an honorary doctorate, and the Atlantic awarded him with peaceful voyages.

During the intermission, I and a cellist friend availed ourselves of the lobby’s excellent refreshment center. As we had a table seating four, two ladies came up and asked to sit with us. One began by asking what we thought of the Shostakovich. My friend spoke up right away. “Well, the performance was brilliant, but it’s a weak piece,” to which the lady replied, “It’s not convincing, is it?” That about sums up the Second Cello Concerto.

Set in an odd configuration, it opens with a Largo followed by two Allegretto movements, played without pause. It’s overloaded with noisy, raucous percussion, even during the two cadences: the first with bass drum, and the second with a tambourine. (Schoenberg’s Violin Concerto also has a cadenza with snare drum, so the idea is not unprecedented.) The larger problem, however, is that the melodic material is generally bland, and nowhere near as fine as that in Shostakovich’s First Cello Concerto.

Growing From Good to Spectacular

Tchaikovsky was in the habit of spending vacations in the Ukraine, known in heartland Russia as “Little Russia,” hence the title, since he incorporated several Ukrainian folk tunes into his Second Symphony, along with what was originally a wedding march in an unfinished opera.

And what a symphony it is! The four movements build from good to better, to spectacular. What we heard was the shortened 1879 revision of the score, thank goodness. The original is way too long and cluttered. The original introduction to the first movement, for example, is twice as long in the original 1872 revision.

The pyrotechnics of the scherzo and finale are as bravura as anything Tchaikovsky ever wrote. They amount to an effect like running into a brick wall with a truck. It’s nearly a concerto for orchestra, and our Symphony musicians latched on to every last bit of detailed nuance, dynamic shading, and technical demand with gusto, as well as subtlely.

Naturally, MTT was largely responsible for this, and his tempos were flawless. That, plus his enthusiastic gestures — far beyond his norm — proved infectious to both orchestra and audience. The “Little Russian” is a lovable piece, and lovingly Tilson Thomas conducted it.

A major ovation followed, but there was no encore. After all, we’d already had one.