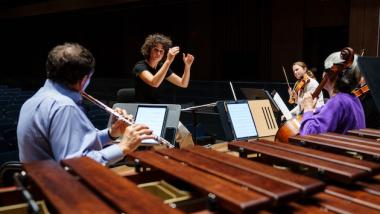 Scheduling a concert at the same time as the Super Bowl is bold. But for the Empyrean Ensemble, one of the premier new-music ensembles in California, bold statements are an everyday practice. While most of America was settling into their couches, an intimate crowd at the Ann E. Pitzer Center heard Empyrean’s first concert of 2019, a virtuosic affair led by Music Director Mika Pelo.

Johannes Kreidler’s short, sound film The Impossibility of Consciously Experiencing the Moment of Falling Asleep opened the concert. More of an audience warm-up than a performance, the movie set the tone for a concert of new music that challenged expectations and expressed the pluralism that is art music today.

Hrabba Atladottir’s solo violin performance of Oscar Bianchi’s Semplice was one of the understated highlights of this program. Semplice is rather brief, Atladottir was well-prepared for the complexity and challenges that this piece presented. Intricate rhythms and high-range demands would trip up any performer who had the slightest doubt about what she was doing. Atladottir managed these passages with ease and confidence, making her performance both enjoyable and engaging.

A stunningly beautiful performance of Isang Yun’s Espace I followed, performed by pianist Michael Seth Orland and cellist Thalia Moore. The sweeping, lyrical melodies and intonation demands of the highest notes of the cello part engendered a captivating performance. Orland and Moore were rhythmically and dynamically in sync, and they brought out an intimacy and intensity in the music unlike any other piece on the program.

Kreidler’s witty compositions bookended the concert, with his peculiar piece Outsourcing closing the concert. The literal outsourcing of his composition is amusing — and a sharp criticism of our current world — but the music itself is no joke. The technical demands of this piece placed enormous pressure on the ensemble, as they navigated the tangled rhythms and melodies together, conducted precisely by Matilda Hofman. It is incredibly courageous to tackle a piece in which each player is essentially performing independently, and to do it as well as they did.

The diversity of the program and variety of the instrument arrangements was most impressive. While anchored in contemporary compositions from Berlin, the composers themselves come from all over the world, each bringing with them elements of the places where they grew and developed musically. At a time when classical music audiences are begging for more diverse programming, Empyrean certainly followed through. Furthermore, the pieces themselves used a wide variety of ensemble structures, ranging from solo violin to multi-instrument groups that included a technically demanding MIDI keyboard part playing popular music samples, which Orland handed capably. The flexibility of this ensemble is just one of its many strengths.

As I departed the Pitzer Center, I checked the score of the big game, only to discover a 3-0 halftime score. Empyrean’s audience were certainly winners by comparison.