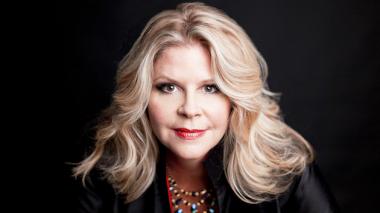 At the risk of reductive gender stereotypes, the San Francisco Symphony’s fine Friday, May 20 performance at Davies Hall unfolded as a contrast of male and female energies.

In the second of four performances of the program, conductor Michael Tilson Thomas began the evening with a stolid, firm-jawed reading of Brahms’ Variations on a Theme By Haydn and ended with a potent and propulsive Schumann Symphony No. 4 brimming with the musical equivalent of high testosterone. In the evening’s shimmering, unsettling middle came Berlioz’s febrile La Mort de Cléopâtre, with the arresting mezzo Susan Graham as the mythic queen headed pell-mell for the brink.

“Widow of Antony and widow of Caesar,” as the second line of P.A. Vieillard’s libretto puts it, Berlioz’s Cleopatra begins by measuring herself by the two major men in her life. The orchestral music has an appropriately feverish and almost frantic quality early on; the soloist and orchestra dove right into it together. By the end of this 20-minute work, written when the composer was in his impetuous mid-20s, the heroine has all but disintegrated before our eyes and ears. The closing “Meditation” is subsumed in suicidal grief and a self-obliterating sense of fate.

Both the visual and auditory forces were in full play in Graham’s remarkable, operatic assay of this strange and entrancing work. Dressed in a magnificent maroon gown, this justly adored singer devoted a deep umber tone and heroically long phrases to the cause of Cleopatra’s dishonor and regrets. She embodied the ruined royal in her stricken gaze and every impacted gesture.

With a sudden upsweep of strings, she was cast backwards to her memories (“Ah, how distant are those days”). Graham’s voice took on a brighter, more focused intensity as she recalled the powers of love when they were in full flower. When Cleopatra compared herself to Venus, Graham sprang to a glittering high note. The ecstasy, of course, wouldn’t last.

Over a heartbeat-like pulse in the orchestra, Graham came slowly, inexorably apart as death approached. Her voice collapsed into husky, half-spoken lines. Her eyes squeezed shut. Broken phrases shuddered to an eerie, sibilant end-stop on the word “Caesar.” A shiver went through the hall, hushed in the orchestra’s achingly expressed final bars.

As if that weren’t enough, Graham proceeded to delight in a completely different vein, with an encore of the last song from Berlioz’s Les Nuits d’été  (Summer nights). Her glowing, liltingly liquid performance transported the audience to the sunny shores of “L’Île inconnue” (The unknown isle). Decorating the song with a host of playful gestures — fingers waves and air quotes and a flirtatious approach to the conductor, leaning her arms on his podium balustrade — she served notice that love is giddy and joyful as well as tragic. Women, as reflected in these two Berlioz selections, contain multitudes.

In another chapter of their ongoing Schumann symphony playbook, MTT and the orchestra made the Fourth a genuine thriller. Hot-blooded excitement poured from movement to movement, played without pause in the composer’s reworking of the score ten years after its original premiere. The grand first movement felt novelistic in scope, with the contours of the string-stated themes in vital conflict with the alarmist trombones and a near military fury of the full brass battalion

There was more where that came from, notably in the third and fourth movements, linked by an ominous transition and a long, muscular climb into the sunlight, through a forest fugue and on to an exultant outburst from the horns and a decisive climax. Only the second movement, marked Romanze, lacked full clarity, though its wistful charms began to bloom.

Nothing felt histrionic or overplayed. There were dynamic subtleties and elastic rhythms. Solo and ensemble turns by cellist Michael Grebanier, oboist Eugene Izotov and concertmaster Alexander Barantschik charmed, especially the second time around. This was the kind of performance that made you want to hear the piece all over again, right away, when it was through, to seize all the details that might have been missed in all the forward-driving excitement.

If the Brahms didn’t inspire that kind of response, it was through no particular fault of the performance. As is often the case with sets of variations, the interest is somewhat more detached and intellectually curious: Let’s see how ingenious the composer can be on a narrowly prescribed undertaking.

Brahms, something of a master at the form, finds a stimulating range of possibilities, with different moods and orchestral colors, soft treads and tripped rhythms and a theme that goes into semihiding before it’s amusingly rediscovered in the long final passacaglia. The performance had a certain grown-up reserve, right from the soberly attentive statement of the theme. If things got a little wooly in the second variation and less than graceful in the seventh, a mournful cast to the fourth variation and a gleeful flurry of horns in the sixth kept the interest up.

With Graham waiting in the wings and that hypercharged Schumann to come, the Brahms was destined to make a very respectable second runner-up showing. On a night like this, there was no shame in that at all.