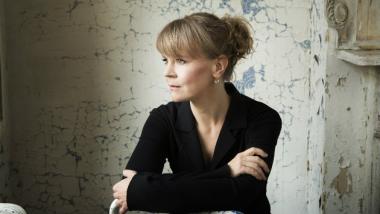 Sometimes superlatives are the best way to tell the story.  In this case, make that a full-praise song for the October 15-18 concerts by the San Francisco Symphony at Davies Hall. In a program of Mussorgsky, Shostakovich, and Prokofiev, with guest conductor Susanna Mälkki on the podium and violinist Christian Tetzlaff as the soloist, the music-making was flat-out spectacular.

Each piece was structured with grandeur and thoughtful discipline and brought to life with excitement and sheen, order and risk.  The musicians came together in passages of serenity and wit, lyricism and rawness, whispering delicacy and harrowing abandon.  The audience at the performance on Saturday, Oct. 17, responded with long and loud applause and a chorus of “Bravos.” For once the standing ovations registered as authentic outpourings of gratitude.

The evening began with Mussorgsky’s Prelude to Khovanshchina, orchestrated by Shostakovich. What might have seemed like a gentle curtain raiser on paper emerged here as a glowingly sustained tone poem that served notice something special was in store.  From the luminous high string tremolos to the distinctly etched details from the woodwinds to the warm tutti effusions, the composer’s evocation of a Moscow sunrise unfolded with uncanny precision and naturalness.

Mälkki, modest and self-possessed in her entrances, exits, and bows, worked in large but clearly purposeful gestures on the podium.  Her sense of connection with the musicians was apparent, as they offered a broad and brushy but also attentively fine-grained Prelude. Clarinetist Carey Bell, who did superb work all evening, supplied the sublime finishing touch with his solo.

Shostakovich’s sprawling Violin Concerto No. 1 is full of pitfalls, both technical and interpretive.  With its expansive moodiness in the slow movements, wild furies in the quicker ones, and a narrow-gauge set of variations to carry off along the way, the soloist faces a formidable challenge. Tetzlaff went at it all like a man possessed.

He brought an air of meditative lamentation to his early exchanges with the orchestra, their conversation deepening before giving way to ghostly echoes, like whispered memories confided in the dark. The music took on a narrative sense of purpose, the phrases folding out from each other as the movement opened new vistas.

Pawing at the stage like some caged creature, Tetzlaff let out a series of panicked shrieks and yelps in the manic Scherzo, marked Allegro Marcato. The rage mounted, careened into a caustic burlesque and then redoubled into steely harshness. Mälkki and the musicians were with him every step of the way, at times conjuring a genuine sense of terror.

The third movement, built around a set of nine variations, turned from alarm to an almost primal sense of tragedy and aspiration. The orchestra’s tread-like ostinatos were the solid ground for Tetzlaff’s keening and frenzies and explorations, all of it giving way to a passage of nakedly exposed arpeggios that had the feel of music itself being invented on the spot.  That continued into the long, daring cadenza that veered into a kind of death wish, the violinist’s tone fading toward extinction. A wildly cathartic sprint, with more shrieks and yells and high voltage passagework, brought this brilliant performance to a pulse-quickening close.

The listener both took in the familiar shapes and colors of the music and saw through them into the symphony’s deep inner workings.  Mälkki set the clock-like ticking of the second movement’s rhythm with such a sense of perky, stuttering delight that the orchestra seemed to giggle along with her.  The violins collapsed in mini-swoons.  The brasses sounded like toy soldiers out practicing their drills.  Then a wild and wooly New York traffic jam broke out.

The Romeo and Juliet ballet material in the third movement was both graceful and shadowed with eerie premonitions. The strings made that happen with their lyrical but somehow quizzical approach. The light-fingered opening of the closing Allegro casually wound the spring for an explosive climax.

Critics are supposed to prove their clear-eyed judgment by finding something to cavil about.  Very well: Tezlaff’s Bach encore was both anti-climactic and not so wonderfully done. And then there was that high-pitched squeal from an audience member’s listening device that marred some of the concerto’s softer passages.

That’s about it. This was, from start to finish, one for the record books.

Mälkki, take note, will be back on the Davies podium October 22-24, with the Chopin Piano Concerto No. 1 and Sibelius Symphony No. 5 on the bill.  Odds are good those very familiar works, like the ones of this past weekend’s program, will make a fresh impression.