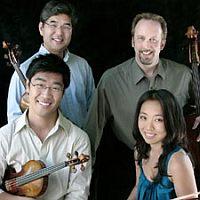 Michelle Dulak Thomson on November 25, 2008
It was a grand design for a concert: two string quartets, one relatively young and the other making its farewell tour, playing three new works (one quartet for each, an octet for the two together), with Mendelssohn's beloved Octet to close. But owing to the death of Johannes Quartet violist Choo-Jin Chang's brother early last week, the ensemble's double bill at San Francisco's Herbst Theatre with the Guarneri Quartet underwent hasty rearrangement. Gone was the work that Esa-Pekka Salonen had written for the Johannes, as well as the double quartet that William Bolcom composed for the two ensembles together. (The Bolcom, as San Francisco Performances President Ruth Felt explained to Thursday night's audience, was an SFP co-commission. She went on to say that plans for a makeup performance were in the works, possibly including a streaming online recording.)

In their place was Dvořák's "American" Quartet (Op. 96), played by the Guarneris, while the Mendelssohn stayed on the program thanks to St. Lawrence String Quartet violist Lesley Robertson, substituting for the absent Chang. It was possible to see the original program as an artistic collaboration between two top-flight ensembles, even though the elder of them was about to disband. With the altered program (and its all-Guarneri first half), the concert inevitably felt more like a naked passing of the torch. But as such, it highlighted the Guarneris' judgment as well as their generosity. Thursday's glimpse of the Johannes Quartet may not have included all the players, or featured them playing anything on their own; still, I can't remember when an unfamiliar quartet has so impressed me in concert. The circumstances made the program opener, Derek Bermel's 2007 Passing Through, a more complex surprise than it might otherwise have been. When the Guarneris sat down to play, and what emerged was the opening of the slow movement of Beethoven's Op. 135 Quartet, my first reaction was that they must have decided to play that mysterious, intimate hymn in tribute to Chang's loss. Only a few bars further in, where Bermel adds a saccharine touch or two to Beethoven's first violin line, did I know that this was actually the first piece on the printed program. Versions of the Beethoven theme, some in remote keys and dauntingly high registers, take up much of Bermel's piece. Vying with them, from early on, is a vehement three-note rising figure that several times takes over the quartet. If this, too, is a loose fragment from somewhere in the history of the string quartet, it's a more enigmatic one. At one point in the performance, I was convinced that it had some referent somewhere, but I couldn't decide where. The third movement of Brahms' first quartet? The slow movement of Smetana's first? Maybe even the slow movement of the Ravel? It might be any of these, or all, or none. The Guarneris played the Beethoven sections with the same serene gravitas they would have given the original work, and the violent interjections with all the fire and fury anyone could want. But I don't know what to make of the piece itself, which didn't seem to have internalized the Beethoven so much as piggybacked on it. Bermel dedicated it "to Amber Miller, who taught me about beginnings." The Beethoven original is, in a sense, "about endings"; we know now that it started life as the finale to the huge C-sharp-Minor Quartet, Op. 131, and that when it was displaced (by an almost unimaginably different movement) it became the nucleus of a new quartet itself. Bermel's own piece has one of those "non-endings" that are more jarring than an abrupt cadence would be, and nearly as crude.

The Dvořák performance was the oddest mix of savvy, fatigue, humor, and wisdom. If I hadn't known that this was the Guarneri Quartet, I'm not sure I would have recognized it. Apart from John Dalley's characteristically obstreperous second-violin playing, nothing sounded familiar. Even Michael Tree's viola, which I would have thought the one inimitable sound in all quartetdom, was strangely muted and tamed Thursday. Arnold Steinhardt, first violin, looked and sounded stiff and uncomfortable, though the ease with which he stretched some of Dvořák's melodic ornaments recalled the old manner. The relative new addition, cellist Peter Wiley (successor to his teacher, founding cellist David Soyer, since 2000, and the only member who hasn't been in the ensemble for all its nearly 45 years), sounded open and fresh, though intimately attuned to the other players' habits. In the context of what Ruth Felt called "the burgeoning, the explosion" of American string quartets since the Guarneris' founding, I wonder what the youngest professional quartets would have made of this performance. Maybe their first impression would have been of carelessness. The Guarneris are laissez-faire in matters of bowing and articulation to a degree that would probably strike a competition-circuit quartet as bizarre. And they just aren't interested anymore in taking the listener's breath away. The few things in their Dvořák that might once have been intended to woo an audience — I'm thinking of a couple of perfectly coordinated violin portamenti in the slow movement — were by now so lived-in that they no longer had any seductive component at all; it was simply how the music went. The ensemble was tight, but not with any effort; "this is just how it goes." You could sense the players' pleasure in living in the piece again, but not quite experience it.

With the Johannes Quartet in the driver's seat, things were rather different after intermission. For the Mendelssohn, the two ensembles were seated antiphonally, with the Guarneris (playing the lower parts) on audience right, the Johanneses on the left. (The exception was in the violas, where Tree left his colleagues to sit in for Chang on the Johanneses' side, while Robertson took his place on the Guarneris' — a concession, surely, to Robertson's scant rehearsal time with the ensemble.) Johannes first violinist Soovin Kim played the opening of the Mendelssohn's first movement with the sort of ecstatic freedom for which that part was made. It reached to the sky, that line, and there seemed no check on it, neither lack of bow nor any other human limitation. Later we had opportunities to hear him bowing magnificently in other ways — the impossibly lightfooted Scherzo, the deft nine-notes-under-the-bow portati in the slow movement — but it's that exalted, soaring legato that sticks with me. His colleagues were scarcely less impressive. The second violinist, Jessica Lee, had much less to do than Kim, but gave the impression that the two could switch parts without difficulty. Peter Stumpf, the Johannes cellist, had the sort of sweetness of tone that tends to come bundled with a smallish sound — except that his own sound was huge. And the Guarneris made a superb supporting cast, probably as good a one as the piece has had in its 183-year history. I doubt that the third and fourth violin parts have been played with more authority. Wiley at second cello anchored the outer movements superbly, and Tree and Robertson were a powerful team as violists. We are far indeed from the day when Louis Spohr played the first violin part of the Mendelssohn and referred to the other seven parts as "the accompaniment." On this outing there wasn't an insignificant or even an unconsidered note in there. Everything contributed, and the whole went off like a rocket.