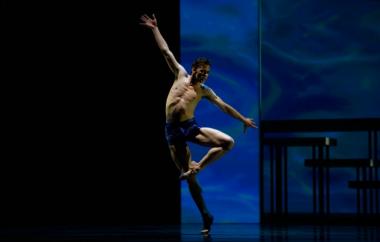 Yuri Possokhov’s Swimmer, a ballet whose premiere I missed last year, is delightfully different. The resident choreographer of the San Francisco Ballet has stopped at almost nothing to retell John Cheever’s harshly chlorinated New Yorker short story, “The Swimmer,” which became a Burt Lancaster movie. It uses suburbia circa 1968, its backyard pools in particular, as a frame for masculine discontents – sort of a wet Mad Men. The Swimmer, having decided to swim cross-county, flings himself into one pool after another, mourning his passing vitality, the futility of his existence, and his onrushing doom stroke by stroke.

Instead of a transposition to film, we have here a move into video. The work of Kate Duhamel, it’s pretty amazing. The pool is the centerpiece, a liquid blue surrounded by a green frame. On the screen, the swimmer is represented by a silhouette (the lighting is by David Finn); we see him in his bathing trunks, diving with a gorgeous splash, white foam soaring upward, or reaching for a towel, or diving once again, deeper and deeper, before kicking up to the surface. Almost simultaneously, we also see the pool as if it’s on the stage, and the swimmer here is the superb Taras Domitro. He’s leaping, spinning like a dolphin, kicking, using his arms to crawl or backstroke. This fusion of the video and the dancer is an almost a magical thing and certainly a tour de force.

As in the movie, the swimmer dives deeply into angst and emptiness. But the plus is that he’s surrounded by wonderful artifacts of the Sixties, including social dances like the swim, watusi, and frug, festively presented by the large cast. Mark Zappone’s costumes include two-piece striped and polka-dotted bathing suits and playclothes (it was a bit early here for bikinis). Alexander V. Nichols has given us a ranch-style tract house furnished with life-size paper doll cutouts of one man’s family (mom with her apron, sis, sonny), a bus to jounce up and down in, and a high-rise office with secretaries (who sit on the suited businessmen at desks) and typewriters. Oh, and autos with tailfins -- major.

It took four composers to reach the emotional pitches Possokhov was after: Shinji Eshima, a member of the San Francisco Ballet Orchestra (which was conducted Wednesday night by Martin West); Tom Waits, Kathleen Brennan, and, for the ultimate dirgefest, Gavin Bryars.

The swimmer, at one point, is alone. He returns to his house, knocks on the door, hears only a metallic echo. The house, like his life, is empty.

It’s Domitro’s story, but Possokhov renders additional sad and disconnected moments for this eloquent company (nine principals, 26 corps de ballet). Boys from the San Francisco Ballet School play a key role as the Swimmer’s past life, a reminder of his lost childhood and forgotten dreams. The universal sense of being adrift becomes a desperate drowning cry at the end, when the company’s men join Domitro in a wildly leaping, kicking, thrashing farewell. The pool’s become a whirlpool from which there is no escape.

The opener, Dances at a Gathering, the 1969 Jerome Robbins classic set to Chopin, was wonderfully presented, thanks in no small part to pianist Roy Bogas and stagers Jean-Pierre Frohlich and Jenifer Ringer Fayette. Sasha de Sola, Yuan Yuan Tan and Vanessa Zahorian were captivating in their trios. Mathilde Froustey was the very embodiment of staccato pertness, energy and perfection. Lorena Feijoo’s solos, brilliantly depicting insecurity in the guise of imperiousness, were a delight, as was Davit Karapetyan’s mischievous yet sweet journeys to one wonderful ballerina after another. The other fellows, equally terrific, were the virtuosic Joseph Walsh, Vitor Luiz, Steven Morse, and Carlo di Lanno.