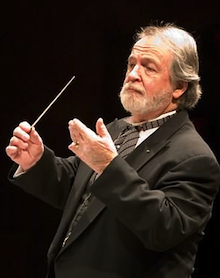 Symphony Silicon Valley, under guest conductor George Cleve, served up a hearty holiday meal in its concert on Saturday at the California Theatre in San José: huge platters filled with rich, heavy dishes roasted to perfection by Johannes Brahms and Peter Ilich Tchaikovsky. The one thing the occasion wasn’t was festive.

Really, look at the cooks and their recipes. Brahms, whose infrequently shown wit was either scholarly or corrosive, was in no holiday mood when he concocted his Piano Concerto No. 1 in 1859. Like his symphony of the same number, this first offering in the genre declares, formally, “This is serious music, blast it!” In both genres, Brahms was able to be more relaxed in a second outing. And Tchaikovsky’s Symphony No. 6, his “Pathétique,” is dominated by its outer movements, which are bleak, tragic, despairing to the point of suicidal, while the two middle movements’ cheerfulness usually sound insouciant or trying to fool the listener into thinking they’re joyful when they obviously aren’t.

Cleve’s reading scaled down the bombast in Brahms’ opening movement and moved deliberately, and rather slowly, through the gentler Adagio and lighter concluding Rondo. Phrasing in the orchestra was clipped rather than extended. The general feeling was one of careful reserve. Soloist Peter Serkin was even more deliberate and cautious in his approach. His playing was more expressive than the orchestra’s, putting across the sense that Serkin was almost wrenched by the emotion of the music, and it was looser in tempo than Cleve’s direction. Sometimes the piano and orchestra matched up in their phrasing, and sometimes they did not.

Serkin sounded more at ease, and perhaps felt more at home, in his encore. Brahms’ Intermezzo in C, Op. 119, No. 3, is one of the lighter of his late piano miniatures, and Serkin made it jump playfully.

Cleve’s emotionally cool approach brought greater dividends in the Tchaikovsky than it had in the Brahms. While the development section of the first movement was excitingly packed with action, the outer sections of the movement and the entire slow finale presented more of that careful reserve. Outlandishly huge pauses before each appearance of the first movement’s lyrical second theme heralded no lush throbbing. Instead, we heard a flat glimmering sheen in the strings, the aural equivalent of a clean, unvarnished wooden table. The entire string-dominated finale was of the same character. This leached out the tragedy from the music while leaving its curvaceous beauty intact.

Cleve’s reading scaled down the bombast in Brahms’ opening movement.

The inner movements, while fast and even bold in the climax of the third movement march, never turned frantic. They were neither happy nor frantically faking it; they were just there, to be heard and enjoyed.

This concert was my first time sitting in one of the acoustically dead spots on the main floor of the California Theatre, in the fifth row middle, right below the performers. In the Brahms, the orchestra sounded muffled and unbalanced. Most of the musicians, and the conductor, were entirely hidden by the piano lid, so I couldn’t see much, either: just a few violinists on either side, Serkin’s profile, and Cleve’s shoes. The piano, untamed by its own lid, meanwhile rang out with all the ugly resonance of a dampened gong. Past experience in other seats assures me that the sound must have been delightful elsewhere in the hall.

Sometimes the piano and orchestra matched up in their phrasing, and sometimes they did not.

Tchaikovsky, without a piano to deal with, had better luck than Brahms in sounding healthy and balanced. Although the winds came across harshly, giving an unfortunate jaggedness to some brilliantly cultivated solo passages, the warmth of the brass somehow survived the trip over the stage. The strings flourished best. Here Cleve’s choice of an antiphonal seating pattern for the concert — with the two violin sections on opposite fronts and the lower strings between and behind them — actually helped the sound.

This seating choice is unusual for Tchaikovsky, a composer normally fond of running patterns up and down the strings. There are few of those in the “Pathétique,” however. When they did occur, they shot across the stage from first to second violins and then worked their way back over through the violas and cellos, an interesting effect. More prominently, the “Pathétique” has several places where the firsts and cellos play together without assistance of the intervening strings, so putting the two sections together made sense.

The arrangement of facing the cellos front brought out, as well, some of their interesting supporting patterns underneath melodies elsewhere in the music. Lucky listeners had a chance to appreciate Tchaikovsky’s often-derided abilities at musical construction.