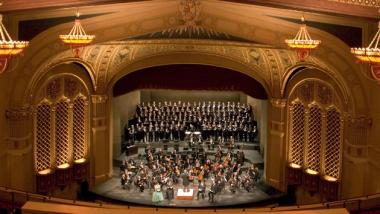 Symphony Silicon Valley began its 14th season with a program dedicated to the memory of Maestro George Cleve, who died just over a month ago at the age of 79. Cleve, who had been music director of the old San Jose Symphony for 20 years (1972-92) and hired many of the musicians who still serve in SSV today, was a frequent guest conductor for SSV and had been originally scheduled to lead the concert at the California Theatre in San Jose on Saturday, October 3. His appearances here always featured his specialty: broad, expansive, deliberate performances of the Viennese classics – Mozart, Beethoven, Brahms – which his deep learning and understanding of the music always made rich and rewarding.

For this concert, David Amado, music director of the Delaware Symphony, appropriately led a solid, basic repertoire program of Beethoven and Schumann, another of Cleve’s favorite composers. Additionally, as a special memorial to Cleve, the orchestra, led by concertmaster Robin Mayforth and without a conductor, played an arrangement for strings of Mozart’s Ave verum corpus, the motet that Cleve so memorably would add as an ideal ending to performances of Mozart’s unfinished Requiem.

That tribute was even more appropriate, as Mozart was the composer closest to Cleve’s heart – he founded the Midsummer Mozart Festival here and directed it for over 40 years – and Mozart’s spirit presided over this concert. Throughout this fine performance the musicians were unanimously bright and alert, with delicate hands on the string bows, plus perky winds and gentle brass.

That flair was particularly successful in Schumann’ Symphony No. 2 in C Major. Amado believes that the key to a successful rendition of Schumann’s notoriously clotted orchestration is to play the music lightly, as if it were by Mozart. Throughout this fine performance the musicians were unanimously bright and alert, with delicate hands on the string bows, plus perky winds and gentle brass.

Though the approach was Mozartean, the result sounded more like Schubert, particularly his Great C Major Symphony, a work Schumann aimed to emulate in his harmonies and the large scale of the composition. Amado showed great skill in shaping Schumann’s complex writing. Phrases that tumble into each other were always clearly conveyed. The overall feeling was more anxious and questing than the solid certainties that Cleve would offer in his later years.

The Beethoven offering was his Piano Concerto No. 5 in E-flat Major, the “Emperor.” Nikolai Demidenko, a frequent Cleve collaborator, was soloist. Though the “Emperor” is a huge work, it’s hardly as craggy as other mid-period Beethoven compositions. Instead, it’s profoundly lyrical and melodic.

That made it a good vehicle for Demidenko to offer some Mozartean playing. In much of the concerto, his right hand would gently touch the keys for delicate melodies, while his left hand pressed down for heavier Beethoven harmonies. Demidenko’s even chordal articulation for the second theme of the first movement produced a particularly charming “music box” effect.

Throughout all this, the orchestra played dutifully, dignified, and stately. The combination did not add up. The ending of the concerto’s Adagio normally melts into a state of warm rapture merely from the effect of its own sheer beauty. In this performance, this section stubbornly refused to melt. Both orchestra and soloist plodded their way through it.

Demidenko’s encore was a little display piece by Nikolai Medtner featuring fast, heavy rumbling, as if to prove that the light touch isn’t the pianist’s only mode. It got more applause than the concerto did.

So listeners are left to wonder what George Cleve could have made of such a program, even as they appreciate at least some of what these musicians can do in his honor. The memorable Adagio in this concert was not Beethoven’s, but Schumann’s. That Schumann Second was a performance that Symphony Silicon Valley could take and fairly measure against any orchestra in the country.