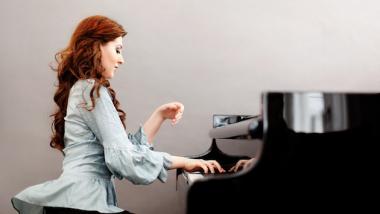 Symphony Silicon Valley made a bold strike in the direction of musical populism by exhuming from obscurity Aram Khachaturian’s once-popular Piano Concerto (1936) and performing it on Saturday, Dec. 7, at the California Theatre in San José.

Like Khachaturian’s Violin Concerto, which has already begun re-appearing here and there — including a performance from this orchestra two years ago — it’s a work of strong rhythms and colorful melody inspired by the composer’s Armenian heritage. Saturday’s soloist was Nareh Arghamanyan, who shares that national heritage, and the conductor was Pietro Rizzo. Both are young performers making their first appearances in San José.

The Piano Concerto was the work that first made Khachaturian’s reputation, but the piece has since often been dismissed with the label of “Soviet kitsch.” That the music is catchy and pulsating, full of grand and heroic extroverted gestures but without florid individualistic display, makes the label understandable. But what happens when the composer of Soviet kitsch is actually talented at his work and — unlike Shostakovich when he took to this vein — sincere in his effusions?

When the concerto is performed with the almost brutal energy shown here, it has to be counted as a success. Under Rizzo’s direction, the orchestra sounded brilliantly exciting, with stark strings and crisply etched winds. The playing was lean and intense, without the excess of utterance often heard in concertos by the likes of Tchaikovsky or Rachmaninoff.

Nor is this a display piece for the pianist as those concertos are, though the part requires much effort and virtuosity. Aghamanyan’s playing was bold and declamatory, focused mostly on figuration and melodic character. She emphasized the Armenian style in Khachaturian’s melodies by tightening the quick figurations. Her encore — an arrangement of Johann Strauss II’s Du und Du (You and you) waltz set — was florid and flashy, everything that the concerto was not. It emphasized Khachaturian’s plain earnestness by contrast.

Together in the concerto, pianist and orchestra evoked not just its ethnic but its blocky Prokofiev-like qualities. They startlingly ramped up the tempo approaching the climax of the Andante, leading to a huge final statement of the theme, with the piano weaving heavy ornamentation around the orchestral statement, and made a similar effect at the end of the finale.

One serious technical challenge facing any orchestra playing this concerto is an instrumental requirement for a musical saw to accompany the first violins in one statement of the Andante’s main theme. Khachaturian originally specified a flexatone, a somewhat less uncommon percussion instrument, but he decided he preferred the saw’s pure tone over the flexatone’s rattling pulse. The problem is that the saw is mostly a folk music instrument; players with orchestral experience are few. Fortunately, the symphony was able to engage Caroline McCaskey, a violist who’s taken up the saw on the side, and who played it in the San Francisco Symphony’s “Barbary Coast” centenary concert in 2012. Her playing softly merged with the violins, giving an almost indefinable tang to their sound.

The concerto was preceded by Mikhail Glinka’s busy and dynamic Ruslan and Ludmilla Overture, at the usual tempo of just a few steps short of as fast as humanly possible. Rizzo brought out a strong, heavy sound from the orchestra, with some impressive sectional and individual solos. In all this, it resembled the Khachaturian.

After intermission, the performers turned to the Symphony No. 2 of Johannes Brahms, an esteemed classic that hardly needs a case to be made for it. Here the music displayed quite a different mood. The first movement in particular was profoundly gentle and easeful. This effect would have been in keeping with typical good interpretations of this work, except that this was relaxed to the point of inactivity. What was missing was the usually concomitant mellow tone, a sense that the musicians were fully inhabiting the score. In occasional forte passages, the music jumped to life as if passing through jagged little mountain ranges in the middle of an untroubled plain.

This mixture of character was partly due to a continuation of the previous works’ crisp playing style. The strings and winds were balanced against each other, but the supporting lines were brought out with a clarity of blocking that contraindicated the anticipated blended mellowness.

The symphony’s Allegro con spirito finale broke this mood. This music was tense and expectant. It still wasn’t a typical Brahms reading, but it worked well.