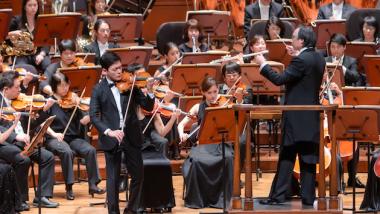 How different the same hall feels with another orchestra onstage. For starters, at Monday’s Taiwan Philharmonic concert, women not only outnumbered men — they were extraordinarily well-represented even in the sections (double bass, brass, and especially, leadership positions) that remain male-dominated in this country’s orchestras. There was no concertmaster entrance; in fact, the orchestra entered the Davies stage en masse. And the applause, after every movement, didn’t feel wrong.

Directed by Shao-Chia Lü, the Philharmonic (known in Taiwan as the National Symphony Orchestra) opened the program with Gordon Chin’s “Uyas Mgeli (Dancing Song)” from his Three Aboriginal Songs for Orchestra — a charismatic, if somewhat uneven, opener. The chromaticism of the initial perpetual motion is a sort of humdrum Bartók, and I wasn’t excited when the material returned at the end of the piece. (In the U.S., Chin studied with Christopher Rouse and Samuel Adler.) In the substantial middle section, though, the music is well worth it.

­Drawing on melodies from the Sediq people (an officially-recognized tribe whose population mostly lives in the mountains), Chin creates a complex dance movement that’s both fast-paced and inconclusive. Off-kilter rhythms and intricate figures weaving in and out of the ensemble disrupt themes that might otherwise sound stalwart. Even the most forceful strains crumble, the tiny scuttling gestures left behind forming a treacherous ground for new lyricism.

Monday’s program also marked the local debut of Yu-Chien “Benny” Tseng, the 24-year-old violinist who is a laureate of both the Queen Elisabeth and Tchaikovsky competitions. Playing the Barber concerto, Tseng’s first performance at Davies was enjoyable, if not especially striking. Really, that’s the nature of the piece: The Barber is a more collaborative affair than a concerto like Sibelius or Brahms, so it’s no wonder if the audience notices the orchestra as much as the soloist.

In fact, the orchestral playing made a lovely display. The presence of the lower strings, especially in the pizzicato bass lines of the first movement, grounded the music in an assuring way (I wonder if the seating arrangement, with the violas on the outside, might help the balance of other orchestras at Davies). The Andante’s wind solos, especially in the oboe, were full-bodied and sweet.

There wasn’t a whole lot of contrast in Tseng’s sound, and his playing sometimes came off as matter-of-fact. At the same time, his directional phrasing (with added accents on the slurred runs, for example) contrasted effectively with the lush playing from the orchestra. For the last movement, which is often played in a rather unconvincing hurry, Tseng’s approach was one of leisure and playfulness. And two encores — Bach’s E Major Gavotte en rondeau and Paganini’s Caprice No. 13 — were graceful and light.

So was Brahms’s second symphony, in a uniquely brisk and understated performance. I could almost see the century’s worth of pencil markings lift off the score.

What’s better: leaving wanting more, or wishing there had been less? Personally, I like a little more more in my Brahms — stretching, hurrying, placing — particularly in the slow movement, which was never too anguished on Monday. Then again, how much guidance does a Brahms symphony really need? Played flowingly and with little to-do, the Allegretto, in fact, felt almost like ballet music — unimportant, in the best way. And the finale, though for the most part brimming with vigor, allowed itself a beautiful moment of softness before racing to the finish. The encore — yes — was Tyzen Hsiao’s The Angel from Formosa, a simple and nostalgic tune.