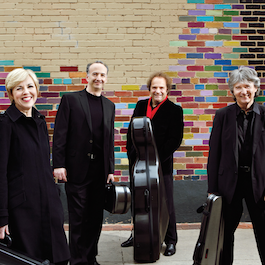 Piano quintets have a unique place in the chamber music repertoire. As there are only a handful of full-time piano quintet ensembles, the repertoire typically sets an established string quartet against a solo pianist, although, far less often, a piano trio may add a violinist and a violist.

The string-quartet-plus-solo-pianist formula becomes particularly interesting when a well-established string quartet is pitted against another well-known solo pianist. Not long ago, we heard pianist Joyce Yang with the Alexander Quartet, and this last warm Sunday afternoon at Berkeley’s Hertz Hall, the venerable Takács Quartet returned with the superb Marc-André Hamelin.

In the program’s second half, the five presented one of the most thrilling piano quintets ever written: the Franck Piano Quintet in F Minor, composed in 1879. The work began with the Takács Quartet giving a desperate, passionate reading of the introduction, followed by a pensive, soulful reflection by Hamelin. As they continued, they held a tightly unified voice through the turmoil. Yet, at times, Hamelin provided an orchestral accompaniment to the Quartet, and vice versa at other times.

The soundscape of the ensemble was broad, with Hamelin’s warm and embracing tone placing the Quartet at the forefront. In addition, Hamelin never let the piano overpower the Quartet, with his deliberate modesty and stoicism. Even in the fervent coda, the reins were closely held, and the brutal character was still kept deliberate and never sounded out of control.

The textural tremolo rendered the work more atmospheric than a landscape, and the Quartet effectively brought out the tension created by opposing melodic lines in the score.

It was easy to forget that it was even a quintet, performed by five distinct souls. Golden beads of notes laid out by Hamelin in the second movement cast a warm glow onto the silken veil of the Quartet. The music breathed, heaving in anguish, sorrow, and even optimism at times. The long crescendo in the coda of the last movement, somewhat reminiscent of Franck’s Variations Symphonique, came as a unified triumph after the nervous struggles depicted by the strings in tremolo.

The Quartet presented two contrasting works in the first half of the program: one by Haydn, who brought the string quartet form into prominence, and an innovative work by Debussy.

Haydn’s joyous String Quartet, Op. 64, No. 3 in B-flat Major was delivered with transparent, clear tones. Uncontaminated by overzealous vibrato, the purity carried the lines, adding sparkle to the air. The trilled laughing passages were executed with hilarity, and the players passing arpeggios from one to another were a delight to witness.

In particular, violist Geraldine Walther, former principal violist of the San Francisco Symphony, maintained her position as a fulcrum throughout the work. Her role was critical in balancing the ensemble, sometimes joining cellist András Fejér to counter the violinists, or stepping aside to let the battle ensue between the violins and the cello.

The Quartet then presented Debussy’s Quartet in G Minor, Op. 10. Though one of the composer’s earliest works, it is an ambitious piece full of innovative writing. The textural tremolo rendered the work more atmospheric than a landscape, and the Quartet effectively brought out the tension created by opposing melodic lines in the score.

The saffron-infused second movement, full of piquant rhythmic tension, was evocative of castanets and leveche. At the opening of the movement, with violist Walther pitted against the rest of the Quartet, it was not hard to imagine Carmen confronting a small crowd. The suave third movement was a slowly shifting warm colorscape, rich yet muted at the same time. The pacing was luxurious and it contrasted well with the evocative and playfully presented fourth movement.