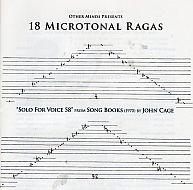 Taking a Chance With Chance

Jason Victor Serinus on November 6, 2007
To some, John Cage is a joy guide, a trickster, a brilliant confounder of established expectations. To others he is a constantly vexing presence: an incontrovertibly original iconoclast who changed the course of modern composition by giving artists permission to do any one of a number of things at any given time. Thanks (or no thanks, as the case may be) to Cage, artists now feel free to create vastly different-sounding performances from the same score — sometimes harmonious, sometimes impossibly jarring — and call the disparate results music. Note the use of the verb is. Although Cage, who would have been 95 this year, left his body in 1992, the "chance" nature of many of his compositions renders his genius, as well as his music, very much alive and in the moment. Those who can't abide his creations may do their best to avoid them — not a great challenge in an era when only a few scattered radio programs on KALW-FM or KPFA-FM occasionally play them. Yet Cage's music persists, both in its own right and as a major force in avant-garde composition. What are musicians to do with the following directions from John Cage's Solo for Voice 58 from Song Books (1970), a quasi-quixotic composition, written for the late pioneering vocalist Cathy Berberian, whose title itself was derived from consulting the I Ching: "Think either of the morning, the afternoon, or the evening, giving a description or account of recent pleasures or beauties noticed. Free vocalize also"? For one answer, we can turn to Amelia Cuni, who on Saturday performed her realization of the piece, titled 18 Microtonal Ragas, in an Other Minds concert in Berkeley. A singer and composer living in Berlin, Cuni is a rarity — a Western women who has spent a decade in India studying North Indian dhrupad singing and kathak dance. She is that uncommon artist who is equally comfortable in the oft-discomforting realms of contemporary multimedia musical collaboration and in the traditional world of Indian raga. It would take far more than this space allows to adequately describe what Cuni has done with sketches and instructions for a work that remained unfinished at the time of Cage's death. Imagine trying to work with the pitches detailed in Cage's drawing, reproduced above. Other Minds devotes no fewer than 22 small-print pages in the booklet that accompanies its just-released, superbly recorded CD of the project to highly literate essays and program materials that begin to explain Cuni's creation. Suffice it to say that, through consultation with Ulrich Krieger, and in collaboration with her longtime artistic partners, who also performed in the concert — multi-instrumentalist and electronic wizard Werner Durand; percussionist/composer Raymond Kaczynski; and percussionist/composer Federico Sanesi — Cuni has managed to create a thoroughly modern, classically Indian realization of Cage's score.

What no CD can prepare you for is experiencing this in person, on an unseasonably hot night in the expansive but lamentably underventilated confines of St. John's Presbyterian Church in Berkeley. After some welcome introductions from masterminds Charles Amirkhanian and Adam Fong of Other Minds, the formidable, posture-perfect Cuni and her musical consorts held the stage for 70 minutes. Dressed in a uniquely patterned orange quasi-sari, Cuni often stood front and center. Wearing slippers that were sometimes discarded, sometimes used as props, plus a small head mike to amplify her voice, she variously sang and recited in Italian and English, danced, and engaged in a variety of theatrical gestures. Texts included Italian and English poetry, as well as treatises by Cuni herself, Henry David Thoreau, Erik Satie, Alain Daniélou, and others. Given Cuni's heavy accent, only some English words were decipherable. It might have helped to understand Italian – or maybe not. (The CD booklet takes care of the English but, perhaps intentionally, offers no translations from the Italian.) At one point, Cuni sat down to write, as if putting her words together on the spot. After another raga, she reclined, donned a sleep mask, and pretended to sleep for a good minute. Throughout, her accompanist co-collaborators offered a variety of conventional and totally unique, indescribably beautiful sounds. One particular section sticks in the mind; in it, a text by Roberto Sanesi that included the words distrazione metafisica was followed by classic Indian tiki tiki tak tak tak tiki tak vocalizations. When I listened to the CD in the relative comfort of my own home, I was tempted to drop all program notes, close my eyes, and trance out. Such is the all-encompassing nature of Cuni's realization. Growing increasingly warm in St. John's while watching Cuni's every movement, however, I felt that trance there was not an option. But entertained, fascinated, and enthralled I most certainly was. A traditional review has no place here. Get the CD. Read first, then listen. There's nothing like it.