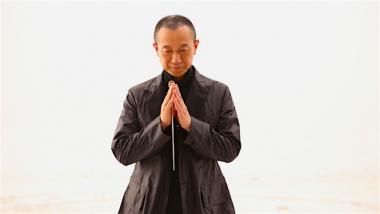 Tan Dun’s Buddha Passion Is an Opera in Waiting

As a contradiction to Rudyard Kipling’s geo-cultural claim, Chinese-American composer Tan Dun has created a body of musical compositions that demonstrates East does meet West, frequently.

It’s been a delicate balancing act of influences that dates back to his 1994 collaboration with the Kronos Quartet, Ghost Opera (for String Quartet and Pipa), and includes his Academy Award / Grammy Award-winning score for Crouching Tiger, Hidden Dragon, and his J.S. Bach-inspired Water Passion, after St. Matthew.

Tan’s latest work is the Buddha Passion — a two-hour long, operatically-scaled work for orchestra, adult and children’s choruses, vocal soloists, and a pipa-playing dancer (the lithe Chen Yining). The world premiere took place, May 23, 2018, in Dresden, conducted by the composer. The U.S. premiere took place over the weekend performed by the Los Angeles Philharmonic, the Los Angeles Master Chorale and Los Angeles Children’s Chorus, and a quintet of vocal soloists all conducted by Gustavo Dudamel. It was a magnificent way to ring in the Year of the Pig and Disney Hall was appropriately bedecked in red and gold.

Jointly commissioned by the Dresdner Musikfestspiele, the New York Philharmonic, the Los Angeles Philharmonic, and the Melbourne Symphony Orchestra, the Buddha Passion is the result of two years of research that Tan spent visiting and documenting musical manuscripts from the ancient, mural-covered Mogao Caves of Dunhuang, an outpost of the Silk Road in western China.

The work unfolds as six acts (stories) that illustrate steps on the path to spiritual enlightenment, as experienced and taught by the Buddha. Their titles are: “The Bodhi Tree,” “The Deer of Nine Colors,” “A Thousand Eyes and a Thousand Arms,” “Zen Garden,” “Heart Sutra,” and “Nirvana.” Each parable ends with an “Ode of Compassion” that relates to the moral lesson: Equality, Karma, Sacrifice, Zen, the Heart Sutra and Heaven-Earth-Mankind.

At times an opera, at other times as an oratorio, the Buddha Passion unfolds on a grand scale. The instrumentation calls for a vastly expanded percussion section (including many exotic instruments that are either struck or bowed, including a massive taiko drum). The vocal forces include the choruses plus five vocal soloists: soprano Sen Guo, mezzo-soprano Huiling Zhu, tenor Kang Wang, bass-baritone Shenyang, and two “indigenous singers”: folk artist Tan Weiwei and Batubagen, a Mongolian-born Khoomei overtone singer who also plays the morin khuur (the horsehead fiddle). This is the same cast that performed the Dreseden premiere and with the Melbourne Symphony in October.

Tan Dun is a difficult composer to pigeonhole. His style constantly crosses boundaries. One passage may deeply reflect his Asian roots and instrumentation as well as extensive use of microtones. Then (like the other face of Janus) Tan’s music can turn as lushly romantic as an opera by Puccini or a movie score by John Williams.

But if you placed the Buddha Passion on a spectrum, with Asian musical traditions at one end and European classical at the other, this piece would tilt far to the west, a sort of melodic first cousin to Puccini’s Asian exoticism in Turandot. At its best, it is poetically beautiful and enchanting. At its worst, it is as over-the-top and syrupy as Mantovani’s string arrangements. It’s also too long.

Each story is lushly orchestrated, with soaring vocal lines principally provided by the quartet of vocal soloists. The story that stands out as having the strongest musical identity is the “Heart Sutra” toward the end of the second act, and it is also the most distinctly influenced by Chinese instrumental and vocal traditions. The microtonality in the music is accentuated with Mongolian overtone singing, by Batubagen, who appears in traditional Mongolian dress and plays the horsehead fiddle. His low, guttural tones are contrasted with the elegance and crystalline voice of Tan Weiwei, who has been described as “the most famous folk/traditional vocalist in China.”

Whether the Buddha Passion is an opera, it seems to need a visual interpretation. The printed synopsis references two specific settings and elaborate stage effects for each story. For example, as the piece opens, “A Dunhuang mural entitled Nirvana is gradually revealed: A reclining Buddha occupies the entire stage, reposeful with eyes half closed. Behind him are his disciples, who will be characters in the following acts. Accompanied by music, the mural dissolves and the characters walk out elegantly from the mural, with Little Prince, the Bird of All Lives, and the Bodhi Tree leading the way. Act One begins.”

None of these scenic elements, unfortunately, were incorporated into the L.A. Philharmonic’s performance. And while the work possesses abundant atmosphere and vocal grandeur, it would benefit greatly from a visually rich production. And a few strategic cuts.