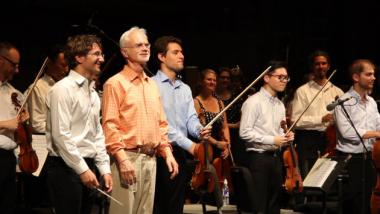 On Saturday evening, August 1, over 800 people in Jacksonville, OR, became the first audience in history to experience back-to-back performances of the music of Samuel Adams (Radial Play, 2014) and his father, John Adams (Absolute Jest, 2010, rev. 2012). That both men were in attendance on a weekend which also included a performance by the San Francisco Girls Chorus, heightened the Bay Area connection. If only the promise of so many gifted composers and musicians had not been thwarted by a sound system incapable of delivering the music’s full colors.

If you have never heard of Southern Oregon’s 52-year-old Britt Classical Festival, you are far from alone. This remarkable gem of a summer festival, whose classical component occupies three, music-packed August weekends on the former Gold Rush-era hillside estate of Peter Britt, has, for over five decades, remained a low-key affair mainly populated by local residents from Medford (five miles away), Ashland, and environs. When the festival’s grounds are packed, as they were opening night and during its pop components, the population of Jacksonville doubles.

Thanks to Bay Area-bred wunderkind Teddy Abrams, Britt’s profile is about to change. After a succession of three music directors – founder John Trudeau, Oregon Symphony conductor James DePreist, and Peter Bay – Abrams became Britt’s fourth music director and conductor in 2013. Only 26 at the time, Abrams arrived with the determination to transform the classical festival into a major event. John Adams praised Abrams’ “wonderful sense of rhythmic intensity… he knows when Absolute Jest boogies and should shake.”

Abrams’ resume includes stints as assistant conductor of the New World Symphony and, in 2009, the YouTube Symphony at Carnegie Hall. Before that, he studied conducting with Michael Tilson Thomas, and with David Zinman at the Aspen Music Festival. In addition to his work at Britt, Abrams serves as resident conductor of the MAV Symphony Orchestra in Budapest, and directs the Louisville Orchestra.

Abrams thinks big. The festival’s opening concert, on July 31, required an orchestra of 130 players plus several choruses and three superb soloists to bring off Abrams’ Kentucky Royal Fanfare, Scriabin’s Le poéme de l’extase, and Orff’s rousing Carmina Burana. The next evening, Abrams brought Britt into the present with the two Adams works, followed by Stravinsky’s The Rite of Spring.

In his pre-concert talk, John Adams praised Abrams’ “wonderful sense of rhythmic intensity… he knows when Absolute Jest boogies and should shake.” All this came through in the final rehearsal, when the Dover String Quartet and Britt Festival Orchestra performed Adams’ permutations of quotes from Beethoven superbly.

It was a thrill to be seated on the fake grass just feet from the stage and hear Adams’ marvelous work played with such dedication and vigor. If, at one of its key explosive moments, the brass did not bray with the elephantine insouciance the music begs for, the playing was still impressive. Certainly the seven-year-old Dover String Quartet affirmed its reputation as one of the country’s most promising string ensembles.

Alas, Britt’s main impediment to success is the need for amplification. While performances take place in a large wooden structure that opens out to a combination of lawn and not-very-comfortable bench seating, the structure’s dry and minimally resonant acoustic lacks the projection capability of classic outdoor amphitheaters. Arena di Verona and L’Orange it is not.

Hence, Britt enlisted the services of Meyer Sound to provide amplification. As good as it was – there was no distortion, even at loud volume – the intensity of color experienced in the best seats in Davies Symphony Hall was nowhere to be heard.

In this respect, Sam Adams’ marvelous six--minute Radial Play fared better than his father’s 25-minute work. Even if colors were somewhat homogenized, the evolution of textures amid a landscape of slowly emerging surprises filled the senses with wonder.

In his pre-concert talk, Sam said, that the piece struck one musician he spoke with as a kaleidoscope -- “you see fractal patterns emerging. But the core ... kind of stays the same throughout the piece.” This may be true, but the manner in which those patterns emerge smacks of genius.

The issue in Absolute Jest was that no matter how energetically Abrams conducted, and how fervently the Dover String Quartet played in passages that were either unaccompanied or supported by a quiet bass foundation, their intensity was dissipated by the sound system. Compared with orchestral fortes, the Dovers came across as puny, which is not what either Adams or Beethoven intended. The beauty and excitement that could be felt up close, without amplification, was lost in the ether.

Stravinsky’s Rite of Spring, curiously, suffered a similar fate. While some passages were thrilling, the sound system’s monochromatic color palette prevented both the composers and Abrams’ ultimate intentions from emerging. Too much brilliance was lost. The Britt Festival board might be wise to consider, as their next capital outlay, major sonic reinforcement of the stage that will allow everyone’s concerted, supremely musical efforts to emerge intact.