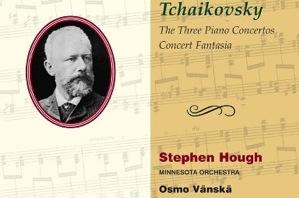 The 50th of Hyperion’s cycles devoted to Romantic piano concertos features a generous heap of Tchaikovsky by pianist Stephen Hough, partnered by Osmo Vänskä and his Minnesota Orchestra. It’s quite an undertaking, with terrific sonics, though made during live performances (Hyperion CDA67711/2, two discs).

Disc I opens with the famous Concerto No. 1 in B-flat Minor, Op 23, followed by the little-known Concert Fantasy in G Major, Op. 56. Hough (see interview) adds his his own transcriptions of two Tchaikovsky songs: Solitude, Op. 73, No. 6 (his last published song), and the popular None but the Lonely Heart, Op. 6, No. 6, from his first published song collection. Disc II opens with the Concerto No. 2 in G Major, Op. 44, and continues with the single movement of the unfinished Concerto No. 3 in E-flat Major, Op. 75. But Disc II also contains two alternate versions of the Second Concerto’s slow movement — neither by the composer.

The Second Concerto has always had problems. It really is too long for its materials, especially the slow movement, which runs nearly 14 minutes. That is further complicated by the fact that it adds two more soloists: a violinist and a cellist. In effect, it’s a movement for a triple concerto.

The main recording includes Tchaikovsky’s own original version. At the end of the disc, a listener can choose to hear either Alexander Siloti’s radically cut version (some 7 minutes long) or Hough’s own effort to comb its hair and straighten its tie at, basically, the composer’s length. Hough mostly adjusts the amount played by the violinist, cellist, and pianist.

None But The Lonely Heart


I can’t claim that any of the three versions is seriously effective, though Siloti’s abbreviated version works best — at least for me. It’s too bad, really, for the thematic material is lovely, but the larger versions just don’t quite coehere; they meander.

The one-movement Third Concerto, a revision of an attempt at a symphonic movement, is far better known, thanks largely to George Balanchine’s use of it for his ballet Allegro brillante. The assertive piano part is indeed brilliant during this, the most heroic-sounding of the concerted piano-orchestral works. Hough, obviously, is having a fine time reveling in its wildness.

Tchaikovsky’s 28-minute Concert Fantasy is divided into two movements: “Quasi Rondo” and “Contrasts.” Each is something like an improvisation, skipping back and forth through lyric sections and folksy dance music. (In truth, there’s more than a hint of the composer’s ballet scores here.)

The catch to enjoying this piece lies in simply letting it flow by in a somewhat mindless way, minus anticipation. The form is so free that there seems to be none at all; it’s more like a ballet in waiting. Yet, as far as I’m aware, no choreographer has ever taken it on.

There’s hardly a more popular or frequently programmed piano concerto than Tchaikovsky’s First, right up there with Rachmaninov’s Second and Grieg’s single entry into the field. Hough’s performance is immaculate, though it doesn’t quite eclipse the great classic accounts by Horowitz, Cliburn, Argerich, and Gilels. On the other hand, none of those has the sonic splendor of Hyperion’s new recording.

Hough’s transcriptions of Tchaikovsky’s two sad songs are effectively faithful to the originals. I wouldn’t be surprised if his transcription of None but the Lonely Heart were to become standard repertory around the piano world.

The orchestral playing on this CD is of deluxe quality by the Minnesotans, one of America’s most underrated ensembles, if you ask me. So, too, conductor Vänskä supports Hough impeccably, sticking to him like a shadow and indulging his occasional inserts of expressive rubato during soulful passages.

In addition to the top-class sonics, the case includes a program booklet with detailed notes in English, German, and French. It presents not only historical facts but also an essay by Hough explaining the concepts of his revision of the Second Concerto’s slow movement. Bios of both pianist and conductor are given, as well. The set stands as a major addition to the available Tchaikovsky.