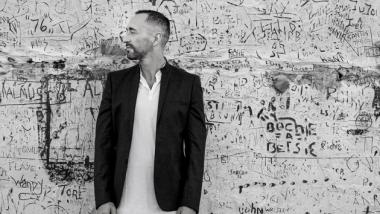 “In the dark times, will there also be singing?” So begins a famous epigraph by Bertolt Brecht, a German writer and a frequent collaborator with the composer Hanns Eisler. “Yes, there will also be singing about the dark times,” the epigraph concludes. Vocalist Theo Bleckmann cited these lines on Saturday, because they aptly described his Songs of Love and War, Peace and Exile. Alongside jazz pianist Dan Tepfer and the Telegraph Quartet, Bleckmann performed exquisitely dark cabaret songs written during the Weimar Republic and the World War II era.

Presented by San Francisco Performances, this program was the third of four concerts comprising “PIVOT: String Theory,” a weekend festival celebrating music that blurs boundaries between various musical traditions. And Bleckmann is certainly an artist who defies categorization. With help from Tepfer and Telegraph, Bleckmann’s lissome voice and protean artistry captivated the audience for the entirety of this intermission-less concert.

Bleckmann began by playing static from a tiny radio into his microphone. Eisler and Brecht composed “To the little radio” when they were exiles living near Hollywood. It’s about an exile depending on a radio daily to hear bad news about his homeland. But Bleckmann’s rendition was also nostalgic and sentimental. The mood turned more opaquely dark in the next song about a father and son saving an apricot tree from frost in the spring of 1938. Their uncertainty about whether the tree will survive provides an obvious metaphor for the situation in that year writ large.

The lyrics of these songs are in German, and Bleckmann handled the translation issue just as he handled the entire program: creatively. Sometimes he read a dramatic rendition of the English translation before starting the song, which Tepfer sometimes accompanied. (And Bleckmann’s unique, idiosyncratic talent exceeds the musical realm, spilling over into the dramatic in good ways.) For other numbers, including Friedrich Hollander’s “Falling in Love Again” near the program’s end, he sang the tune first in German, and then repeated it in English. And for the “Song about the wife of a Nazi soldier,” he held up posters, each with a key German word and a picture depicting its meaning.

Another highlight near the performance’s beginning was a set of songs about love and imminent war. Eisler and Brecht wrote Four Lullabies for a Working Mother for Brecht’s wife, Helene Weigel, when she was pregnant. At the time, the Weimar Republic was collapsing, and Hitler’s ascent was imminent. Dissonant, creepy strings from the Telegraph players helped to convey the sense of foreboding in these songs that describe a mother worrying about bringing a child into the world at an odious time.

Bleckmann explained what kinds of music were actually on the radio during the war. The Eisler/Brecht songs performed this weekend were not, but the musicians performed two songs that were. The first was one the Third Reich used for propaganda, “Davon geht die Welt nicht unter” (The world won’t end because of this). Bleckmann delighted with his rubato, as well as with his wonderfully exaggerated emphasis of the sfzorandos that happen on downbeats of this song in triple meter. The audience also enjoyed “Lili Marlee,” a song that was popular on both sides of the war thanks to Marlene Dietrich. Bleckmann’s rendition sounded like a flattering homage to Dietrich.

Bleckmann also programmed songs that he thought are particularly relevant for our present day. For example, Mischa Spoliansky’s “Masculine and Feminine” was written in the 1920s, but it describes non-binary gender identities. And as an encore, the musicians performed a pacifist song that Eisler wrote for a children’s choir. Bleckmann said he couldn’t believe it was written so long ago, thereby implying it still feels relevant now. But if we are living again in dark times today, at least we have Bleckmann to sing dark songs — and he sings with singular, inimitable splendor.

Bach has the strongest pulse in this curiously quiet concert of mostly new works.