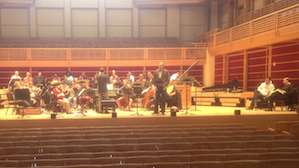 Jason Victor Serinus on January 26, 2014
Theodora (1749), the Handel oratorio indelibly associated with Lorraine Hunt Lieberson’s transcendent performances in the Bay Area, Glyndebourne, and beyond, returned to Northern California on Saturday night. To say that the performance was ravishing, especially in the splendid acoustics of Weill Hall, is to tell but part of the tale.

The concert performance, which moves East to Carnegie Hall and then the U.K. and Paris, was conducted by early music master Harry Bicket. Bicket had previously conducted Lieberson both in Glyndebourne in 1995 and, eight years later, in their spiritually elevated recording of Handel arias with the Orchestra of the Age of Enlightenment that includes Irene’s major arias from the oratorio. Hence the extra interest in Theodora’s return.

If Theodora, Handel’s penultimate oratorio, was a resounding flop at its debut, it was not for want of some of his finest and most dramatically expressive writing. That the music is as emotionally direct and sensually beautiful as anything he ever penned became clear as soon as Davies, singing the take-no-prisoners Roman President of Antioch, bit into his opening recitatives and arias with astounding drive, emphatic word painting, and an emotional identification that would cause many a voice to cave under pressure. How many artists, veteran and otherwise, can sing with such seemingly unstoppable, bloodthirsty forward momentum, yet maintain constant beauty of tone?

Daniels was his equal in the virtuosic department. His upper range has thickened and grown weightier with age, with less of the ringing overtones that made it so fresh and unique – the same happened with Marilyn Horne as she matured — but the astounding command of long-breathed coloratura runs and perfect trills remains intact. It was a masterful performance.

Röschmann, whom many music lovers will know from her remarkable assumption of Pamina in the Colin Davis video of Mozart’s Die Zauberflöte, was worth the much too-long wait. Singing with rare gravitas, surprising body of tone lower in the range, and accent-perfect English, the German soprano reigned in the natural brightness of her tone until her final aria, where her self-sacrifice in the name of love for Didymus and Christ called for the light that she can shine at will.

Well before that — this is a long, three act oratorio that calls for a certain level of sacrifice from the non-committed — she toned down her supremely free, technically perfect high flights in arias where Theodora’s predominant emotion was sorrow. Her aria, “Angels, ever bright and fair, take, oh take me to your care” was so deeply felt and exquisitely shaded as to elicit tears.

To these ears, Connolly’s indisputably gorgeous voice initially sounded a bit too rich and royal for Irene. As the evening progressed, however, her instrument settled, the legato became smoother, and an extremely special hushed stillness began to emerge. Her final short recitative radiated the beautiful simplicity and unshakable inner faith that only partially emerged in Irene’s great aria, “As with rosy steps the morn.”

How much time Streit had to practice his music before taking Kennedy’s place is unknown. He sang well, with notable beauty of tone in his middle range, but without noteworthy characterization. His highest notes were disappointingly voiced lightly, without the requisite weight and emphasis that the writing called for.

If Streit’s vocalism did not, in the end, command attention, Wachner’s maximally expressive, beautifully voiced chorus and Bicket’s expert band certainly did. Even if the buoyancy that distinguishes Nicholas McGegan and Bruce Lamott’s work with Philharmonia Baroque rarely surfaced, both orchestra and chorus seemed to bend to the musical line and emotional import of the text at will. The tenor who sang the uncredited role of the Messenger deserves special commendation for beauty and strength of tone equal to that of the name soloists. All told, it was a performance to cherish.

The only major disappointment of the evening was the lack of a full house for such a major musical event. Weill Hall is a gleaming, golden wonder, and the drive, while long, is remarkably easy and unimpeded on a Saturday night. Here’s hoping word will spread about the extraordinary offerings, classical and otherwise, at the Green Music Center.