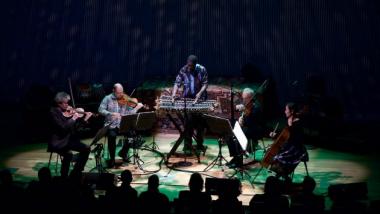 More than 40 years into its history, the Kronos Quartet continues to initiate an astounding number of new projects. Notably, the Fifty for the Future program will commission 50 works designed to train young chamber musicians.

But what stands out about the group, more than any specific project, is the care it gives to all its collaborations: Kronos doesn’t simply feature superstar instrumentalists from a variety of musical traditions, but creates with these artists experiences that sound and feel deeply meaningful.

But first, Kronos played the West Coast premiere of Donnacha Dennehy’s One Hundred Goodbyes (Céad Slán), which features the disappearing tradition of sean nós, a style of unaccompanied Gaelic song. Dennehy’s work samples several field recordings collected between 1928 and 1931 through an initiative by the fledgling Irish government.

Too often, electronic samples add little value to instrumental parts that could stand on their own. But even as the recorded track floats in and out of Dennehy’s work, it acts as an esteemed fifth member of the group: It’s as if the singers are still with us.

Accompanying the track in an undulating, post-minimalist texture, the members of the quartet occasionally emerge from the background in direct imitation of the vocal lines. In the last movement, the strings play tremolo while moving their bows across the different sounding points, creating unpredictable pops of resonance. It’s a simply gorgeous work, and the ensemble playing was at its finest here.

Kronos traveled further back in history with the U.S. premiere of Fodé Lassana Diabaté’s Sunjata’s Time, a five-movement work based on the life of the warrior prince Sunjata Keita, founder of the Mali Empire. Each of the first four movements features a different member of the quartet to depict the characters central to Sunjata’s life — a repetitive structure that could easily sound formulaic. But because Diabaté creates such varieties of texture, rhythm, and modality, Sunjata’s Time feels fresh.

Diabaté coaxes more variety of sound out of his instrument than I previously thought possible of the xylophone, and he can play the most rapid passages with utmost lightness. In the second movement, he and second violinist John Sherba made a particularly strong duet, and his writing for first violinist David Harrington — joining in on the melody for just a few notes — was particularly creative. The final movement brings the musicians together “to portray the harmonious and peaceful reign of this great, West African emperor,” and if Diabaté’s music is any indication, it must have been a wonderful time to live.

The cultural celebration continued with Homayun Sakhi’s Rangin Kaman (Rainbow), written for Kronos in 2008. This large-scale work draws inspiration from both the natural phenomenon itself, and from the huge range of musical styles and cultures that make up the distinctive regions of Afghanistan.

In Kronos’s recording of the piece (Smithsonian Folkways Recordings, 2010), however, Sakhi’s mixture of styles sounds less varied than scattered. The second half of the piece loses focus: Two string sections, in particular, seem at odds with what’s come before.

But on Saturday, the magnetism of the performers  — including Sakhi (rubâb), Salar Nader (tabla), and Abbos Kosimov (doyra) — transformed these disparate sections into a cohesive whole. The rhythmic sections were vibrant and raucous, and, in their interjecting lines, second violinist Sherba and violist Hank Dutt seemed to fully internalize — and own — Sakhi’s mesmerizing, improvisatory style.

The program opened with Kronos’ own arrangement of the traditional Scandinavian folk song Tusen Tankar (A Thousand Thoughts). It’s a repetitive tune made extraordinary by additional amplification that, in surrounding the audience with sound, augments the scope of the piece. The lyrics — about unrequited love — despair, but the musical effect is quietly hopeful. With luck, Kronos will play this piece for many years to come.