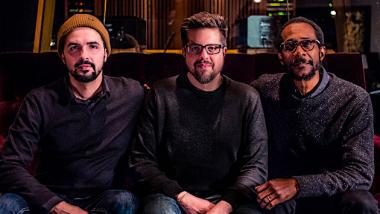 Geography can play an essential role in the experience of live music. At the California Jazz Conservatory’s Rendon Hall on Thursday, an unobstructed sight line of drummer Brian Blade, who was situated facing south at stage right, added a steady thrum of drama to an ensemble designed to create exquisitely textured music.

Making its debut as the CJC’s new trio-in-residence, the recently formed state-of-the-art jazz combo with French guitarist Romain Pilon and bassist Jeff Denson is the latest creative coup for the Berkeley school, where Denson is newly installed as the CJC’s dean of instruction (taking over for the conservatory’s founder and ongoing president Susan Muscarella). A musician of vast and varied resources, Denson has worked assiduously to build the Bay Area scene since being hired in 2011 as the CJC’s first full professor (he performs two doors down the block at Freight & Salvage on Sept. 5 with the San Francisco String Trio, a collective ensemble with guitarist Mimi Fox and violinist Mads Tolling).

Focusing on music from the upcoming album Between Two Worlds, on Denson’s label Ridgeway Records, the trio played an extended 95-minute set that included precious few traditional solos. Rather, the musicians maintained a steady conversational flow. When a player slipped into the foreground, the others usually responded not as accompanists supporting a soloist but as equal partners steering the ship.

For much of the concert Pilon employed a soft, pliable archtop tone, playing with burnished warmth and oblique lyricism. But he occasionally dipped into a bag of effects, adopting a thick Telecaster tone or subtly deploying feedback to conclude a phrase with an exclamation point. Denson, a veteran bandleader, is more than comfortable in a lead melodic role. His thick, beautifully articulated notes seemed to fill the room.

What made the trio’s finely calibrated group interactions possible (or audible) was a bravura performance by Blade, who has long been revered as a supremely creative musician. Known for a dynamic range as deep and wide as the Grand Canyon, Blade was at his coiled best in a room that quickly exposes drummers who won’t adapt to live acoustics. The trio brings out the quiet in him, and whether he was using brushes, small mallets, sticks, or his bare hands, he created a rhythmic lattice that kinetically shaped the musical flow while never overpowering a bandmate’s note.

Denson and Pilon wrote all of the trio’s music, and their contrasting approaches added another layer to the set. Denson’s tunes often start mid-phrase, as if you’re entering a conversation in mid-course. Given the lambent quality of his tone, it’s not surprising that his tunes often seem to evoke specific emotional states, like the wistfully melancholy “Nostalgic Farewell” or the desolate “Song of a Solitary Crow.” Pilon’s tunes aren’t as programmatic, and offer more of a sense of mystery, like on “Azur,” a piece that featured Denson’s ravishing bow work.

Throughout the set the group avoided any kind of cliché, whether in harmonic choices, grooves, or an instrument’s given role in the ensemble. Unmistakably cut from the cloth of contemporary jazz, it sounded like music of the future. And fortunately, there’s more to come.

Blade returns to the Bay Area on Sept. 28, when he brings his Bobby Hutcherson tribute project Life Cycles to the SFJAZZ Center. He’s back at the Freight on Nov. 13 with another extraordinary trio, Steel House featuring SFJAZZ Collective pianist Ed Simon and bassist Scott Colley (who was a Blade bandmate in Josh Redman’s Still Dreaming). And Denson, Pilon, and Blade officially celebrate the release of Between Two Worlds at the Freight & Salvage on Feb. 11, a date worth putting down on the calendar today.

Notable guests join the hip big band as it premieres selections from a new CD.

Joshua Redman and Ambrose Akinmusire highlight the final concert of SFJAZZ’s all-star tribute to the influential saxophonist and composer.

It Was 50 Years Ago Today