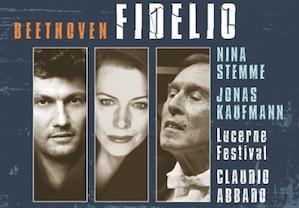 Fidelio’s story of an enslaved freedom fighter who experiences liberation through love sounds as if it could have been written in our present time. Beethoven’s unforgettable music may be two centuries old, and the conceit of a woman whose disguise as a man escapes the recognition of her potential bride and father-in-law may be as incredibly operatic as they come, but the passion and humanity with which Claudio Abbado conducts the Lucerne Festival Orchestra, Arnold Schoenberg Chor, and a sterling cast has the power to bring you to tears.

Abbado believes in Beethoven’s music with all his heart and soul. His intro to and pacing of the radiant opening quartet, “Mir ist so wunderbar” (Such wonder fills my breast, I feel my heart must burst), is so loving, gentle, and sublime that it brings to mind the most magical of Mozart’s operatic ensembles. Leonore’s great solo scene and her prisoner husband Florestan’s equally moving second act opener both grip us not just because they are wonderful pieces of music, marvelously sung here by Nina Stemme and Jonas Kaufmann, but because they are framed and supported with such emotional immediacy. The final scene of recognition, rescue, and redemption transcends all artifice to serve as a profound spiritual rite of passage.

Kaufmann uses every tone at his disposal to express passion, pain, and ultimate liberation. His “Gott! Welch Dunkel hier! ... In des Lebens Frühlingstagen” (God! What darkness here! ... In the springtime of my life) begins with a flawless swell from pianissimo to double forte. As impressive as that may be, what elevates it from superb technique to high art is the way Kaufmann transitions from the husky, covered tones of an enslaved, starving prisoner to the gleaming sound of someone crying for his love, conveying the emotion of the moment. His spoken dialogue is equally convincing.

Although Stemme’s almost uncontainable passion translates on record as a bit of unsteadiness, and the microphones cover too much of her glorious tone, the triumphant climax of her great “Abscheulicher! ... Komm, Hoffnung” (Loathsome monster ... Come, Hope) gleams like a blade cutting through steel bars. She gets steadier as the opera progresses, and delivers dialogue as vital as Kaufmann’s. Christof Fischesser (performing Rocco) may be out of his element as a speaker, yet his singing is extremely beautiful and filled with humanity. Nor can I slight the contributions of Peter Mattei (Don Fernando), Falk Struckmann (Don Pizarro), Rachel Harnisch (Marzelline), and Chrisoph Strehl (Jaquino).

Operaphiles whose shelves are already sagging under the weight of multiple versions of Christa Ludwig’s Leonore, Jon Vickers’ Florestan, and the two live recordings from Furtwängler (featuring Flagstad and Patzak/Mödl and Windgassen) may wonder whether there’s reason enough to purchase this live document (with no audience noise, as strange as that may seem). Thanks to Abbado and Kaufmann, the answer is a resounding “yes.” As in their Decca aria recital with the Mahler Chamber Orchestra, their musicianship is of the highest order.