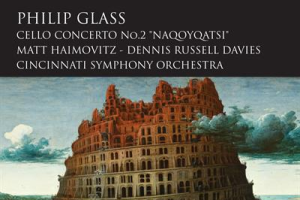 Through a Glass, Darkly 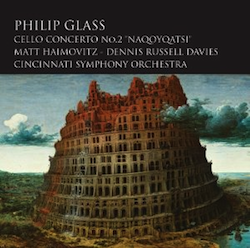 Philip Glass’ music is as easy to recognize as that of any composer in history: the trademark repeated arpeggios, the syncopations, the brooding and ominous tone of his recent large-scale compositions, the blocky orchestration. Despite this, the composer still has the power to surprise the listener, even amid the well-worn and familiar aspects of his style.

His Naqoyqatsi is a case in point. Glass originally composed it for Godfrey Reggio’s film Naqoyqatsi: Life as War (2001); then, commissioned by the Cincinnati Symphony Orchestra, he expanded it a decade later to a full-scale cello concerto. It’s now been recorded by that orchestra, under Dennis Russell Davies, long a champion of Glass, who also conducted the 2007 world premiere of Glass’ Appomattox at San Francisco Opera. Davies is the ideal conductor for this music, and the orchestra knows and plays the Glass idiom beautifully.

“Full-scale” is perhaps an understatement. At nearly 40 minutes and with seven movements, Naqoyqatsi is both ambitious and broadly conceived. It is also somewhat idiosyncratic in its treatment of the cello, which spends a startling amount of time in its upper registers, where so many cello concertos dig in to the instrument’s rich middle and low registers. There’s a just-audible sense of strain and stretching in Matt Haimovitz’s playing, which is appropriate enough for the age-of-anxiety mood of much of the work. His lean, none-too-plush tone also suits Naqoyqatsi well.

Perhaps the most remarkable movements are the third, fifth, and seventh — titled, respectively, “New World,” “Old World,” and “The Vivid Unknown.” The “New World” and “Old World” movements are scored largely for the solo cello, with the orchestra kept very much in the background, and have the character of extended soliloquies, the cello speaking as much to itself as to the audience. In “New World,” discreet percussion punctuates the almost-improvisatory cello line — and there’s a swift and startling segue into “Intensive Time,” the dramatic and extroverted fourth movement.

Davies is the ideal conductor for this music, and the orchestra knows and plays the Glass idiom beautifully.

In the contemplative “Old World” section, the cello has a keening, wailing line, accompanied this time by pizzicato orchestral strings. It’s also succeeded by a surging, dynamic movement, titled “Point Blank.” To close out the concerto, Glass springs off the opening phrase of the slow movement of Beethoven’s Fifth Symphony, which is, of course, played by cellos and is one of the master’s great, long-breathed melodies. Here, the solo cello alternates with the full orchestra, playing what sounds like a set of short and gentle variations on a fragment of Beethoven’s melody, bringing the concerto to a contemplative close.