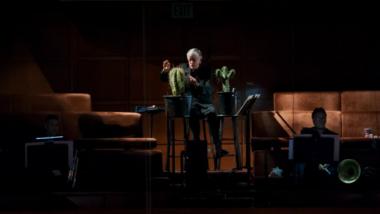 In a recent episode of Portlandia, comedians Fred Armisen and Carrie Brownstein play a pair of entrepreneurs advertising their new store, Shocking Art Supplies. The store sells pre-smashed TVs, baby doll parts, mannequins, and spray-paint stencils — everything an art student would need to really stick it to the Man. San Francisco Symphony’s performance on Saturday of John Cage’s 1975-76 work Renga called to mind the irony of the Portlandia sketch, in which the once-subversive materials and techniques of the avant-garde are reduced to stereotypes and nicely packaged in a typical strip-mall arts-and-crafts store.

Renga is a mixture of Cage’s favorite creative ingredients. The title refers to a Japanese poetic form, whose syllabic arrangement 5-7-5-7-7 determines the pieces’ formal proportions. The score itself is derived from notebook doodles of Henry David Thoreau, which the individual members of the orchestra must interpret as musical lines. The result is a fascinating polyphony of indeterminacy — what conductor Michael Tilson Thomas dubbed an “orchestral rainforest of sound.”

Taking a cue from Cage’s statement that the work could be mounted in memorial of an individual, MTT dedicated the performance to Cage and his compositional career. Incorporating Cage’s own collage technique, MTT layered performances of nine smaller Cage works on top of Renga. In addition, actor Tim Robbins recited the composer’s infamous 1950 Lecture on Nothing while television excerpts from mid-century America played intermittently on two screens above the stage.

This “musicircus,” as MTT called it, played into what the audience knew and expected about John Cage — Cage is random, Cage is wacky, Cage is unexpected.

Any irony in Cage’s compositions is always the result of serendipity — he sets up the compositional parameters, like a scientist, and lets the experiment run its course. Cage’s original Renga piece allowed for these sorts of happy accidents to occur naturally. But when ironic juxtapositions are planned, as they seemed to be in MTT’s arrangement of Renga, they are no longer serendipitous nor random. The final product is more akin to the Shocking Art Supplies store of Portlandia, which sells the “found” objects of subversive art and makes it possible for anyone to stage the avant-garde.

The video footage, which MTT claimed was randomly selected by designer Clyde Scott, was especially irritating. Not only did this montage of Chevrolet commercials and Cold War-era, duck-and-cover cartoons come across as a cheap imitation of “statement art,” the audio was so loud that it often covered up the real gems of the evening’s performances — the Cage miniatures that overlapped with Renga.

Carey Bell in his performance of the Sonata for Clarinet from 1933 provided a haunting prelude to Renga, especially when he was joined by Robbins in the opening lines of the Lecture on Nothing: “I am here, and there is nothing to say.” In a Landscape, a dreamy harp solo from 1948 performed by Douglas Rioth, called to mind Debussy’s Deux arabesques as well as Japanese koto music. Both works were in the style of Cage’s 1947 The Seasons, which MTT conducted on the first half of the program. These earlier works demonstrate a Debussyan melodic sensuality coupled with Japanese pentatonicism and textural sparseness.

But the highlight of MTT’s Renga arrangement was the inclusion of Cage’s 1975 Child of Tree for amplified cactus. Though the audience chuckled when the conductor announced the “cactus soloist,” Tom Hemphill, it became clear that this was no 4’33’’ gimmick. Using his fingers and different rods and tools to flick the spines of the cactus, Hemphill created a fascinating range of sounds reminiscent of the mbira thumb piano. The effect was quite mesmerizing when coupled with Robbins alone or with one or two of the other soloists.

In fact, it was quite a pity that the miniatures couldn’t have been heard individually and in their entirety instead of broken into excerpts and sprinkled over Renga. The wacky and the weird needn’t be forced upon Cage’s music.