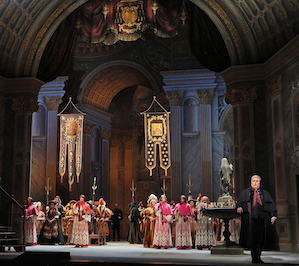 What a difference a change of principals can make. Even as the temporarily felled Angela Gheorghiu is on the mend from a messy bout of intestinal flu, Patricia Racette, Mark Delavan, and Brian Jagde have swept the War Memorial Opera House stage clean with a powerhouse performance of Tosca that proves there’s nothing in the least shabby about Puccini’s 112-year old melodrama when gifted artists polish it like new.

This time, when Music Director Nicola Luisotti’s percussion, brass, and strings set the stage with a flourish stirring enough to stop the most determined tweeter mid-stream, there was reason aplenty to keep eyes and ears open. After Christian Van Horn (Angelotti) again made a strikingly strong appearance, and veteran Dale Travis (Sacristan) buzzed around onstage with such attention to detail and vocal inflection as to make me apologize for calling his exceedingly alert portrayal “stock,” tenor Brian Jagde (Cavaradossi) strode onstage with the ease and assurance of a seasoned pro. From his first phrase, filled with power and conviction, it was clear that this was going to be a very, very different night.

Jagde has done his Divo homework. His rapturous opening love song, “Recondita armonia” (Oh hidden harmony) was not only ardent and filled with feeling, but also climaxed with a burnished high B-flat that grew in power and intensity until he felt assured that it had made its mark. Jagde then followed up with a final “sei tu” intentionally overstretched to elicit cheers. His was but the first of many messages to Maestro Luisotti that this would be a night when the conductor would have to keep up with the seemingly spontaneous phrasing of his inspired principals, rather than beat them along.

Flash to Racette (Tosca). Entering with mouth tight, eyes flaring, and voice filled with suspicion, she immediately had audience members rubbing their hands with glee, assured that a show was in store. Jagde, a Cavaradossi who clearly delights in his beloved’s show of jealousy, smiled, approached from behind as she played pious before the statue of the Madonna, and lifted her head covering with the seductive joy of someone who has lifted far more in the recent past. And then, with voices far stronger than we heard the night before, the two went for it.

Racette’s Tosca, simply put, is delicious. Her voice may have grown more tremulous on top, with an exceedingly wide albeit still fast vibrato that may spell trouble in the future, but she pushes through it with vibrant force. She certainly knows how to play a role for all its worth. Nor is Jagde anywhere the slouch. Mixing vocal passion with a host of gestures unseen the night before, this duo guarantees delight. You are going to see them, aren’t you?

Enter Delavan. The baritone may have grown a bit bigger in his britches, and his voice even throatier, but his Scarpia fills the stage with its combination of feigned elegance and dastardly brutality. Delavan’s face is always alive, and his voice, when clear, oft commanding. Best of all, he loves to surprise you by switching from patrician to panther almost without notice.

The interplay between Scarpia and Tosca is what gives the end of the first act and the whole of the second its power. Delavan knows how to smile with delight as he trips up his prey (literally as well as figuratively), and Racette excels in feeling sorry for herself as she gets drawn into Scarpia’s evil web. With Joel Sorensen’s worm of a Spoletta feeding the show, Delavan offered wine and Racette venom. There was no trouble hearing this duo over Luisotti’s orchestral push (although it’s possible that he held his forces somewhat in check following opening night’s excess).

When Delavan removed his jacket, we knew he meant business, and as he headed toward Racette to claim her, that he knew his birds and bees as well. The only letdown was in the denouement, which Director Jose Maria Condemi choreographed like so many others before it. Maybe Racette can think of something new before her next time onstage. How about sticking one of the candelabras in Scarpia’s hand for starters?

In the final act, Ryan Nelson-Flack wasn’t the strongest or steadiest of Shepherd boys, nor Jagde capable of the sweetest “E lucevan le stelle” on record, but they made their committed mark. As before, Jagde’s interplay with Tosca was delightful and affecting. And with Luisotti at the helm, Puccini’s music shone with all its considerable glory.

Racette’s ascent to the parapet seemed less silent movie freeze frame than the night before — can’t Condemi come up with some way to take up the time before the final jump other than having Spoletta and his partners in slime stand stock-still?  Racette knows how to jump like the best of them. If ever an ending were calculated to leave an audience applauding, this is it.

In a world of Toscas without Callas, di Stefano, and Gobbi, this pack of principals may be one of the most engaging around. Nor would I count Gheorghiu down and out. All we’ve seen so far is a first act performed by a half-felled pro who is committed to faking it even as her gut is screaming, “Get offstage!” The woman is a fighter. Given the competition, expect a powerhouse, give-it-all-you’ve-got performance when she’s well enough to make it back onstage.