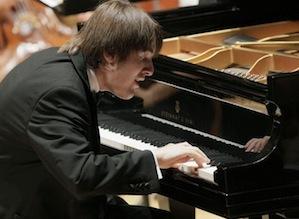 The 2011 International Tchaikovsky Competition in Moscow was a fascinating, if occasionally sordid, affair. Yet, despite some controversies, a few promising young star artists emerged, one of whom was indisputably Daniil Trifonov, the eventual winner of the competition. (By that time, he had won First Prize at the Rubinstein competition in Tel Aviv and Third Prize at the Chopin Competition in Warsaw.)

His Saturday recital at Saratoga’s Montalvo Arts Center was the first time I had heard Trifonov since the Tchaikovsky Competition (June 14–July 2 of last year). Since then, the artistic growth of the 20-year-old musician has been spectacular, which was immediately apparent in the program’s opener: two of Schubert’s songs, Frühlingsglaube and Die Stadt, arranged for piano by Liszt. During his competition performances, Trifonov wore quite a bit of his expressiveness on his sleeve. Now the pianist is far more subdued visually, and it appears that his formerly exuberant facial expressions and bodily movements have been channeled directly into music itself. There are decidedly no drawbacks to this process of internalization, only benefits.

In the two sharply contrasting Schubert-Liszt pieces, Trifonov shifted effortlessly from the tender lyricism and alluringly singing lines of Frühlingsglaube to the dark-colored, forbidding, and, at times, almost impressionistic Die Stadt.

But it was Schubert’s B-flat Major Sonata, D. 960, that made it abundantly clear that a description of Trifonov’s talent should include more phrases than merely “beautifully pliable phrasing,” “rhythmic vitality,” and “acute attention to detail.” More important, he possesses a rare storytelling gift. Schubert’s last Sonata is so drawn-out that listeners may grow bored during the 40-minute Sonata.

It was probably the first time I truly regretted that this immensely long piece had came to an end.

Trifonov, however, presented such a gripping account, filled with poetic intimacy and warm sincerity, that the audience in Saratoga fell entirely under his spell. It was probably the first time I truly regretted that this immensely long piece had come to an end; I wanted it to last much longer. Indeed, it could have been a bit longer had the artist repeated the exposition in the first movement. Perhaps when he plays the Sonata again, he should consider doing just that (amazingly, that was the first time he ever played the Sonata in concert!).

A Master of Color Painting

In the first book of Debussy’s Images, which followed the Schubert, Trifonov displayed his extraordinary coloristic flair. He took to heart the composer’s wish to turn the piano into an “instrument without hammers,” merrily juxtaposing various spectra of tone colors, now luminously floating and melting, now seductive, now darkly mysterious.

Trifonov is one of the most pianistically soft-spoken virtuosos today.

A true revelation, though, came afterward, in Chopin’s Études, Op. 10. These 12 pieces were never intended to form a cycle, but Trifonov managed to string them all together and weave yet another enthralling story, with one étude leading into another and the suspense building up. Many pianists, even the best, use these virtuosic gems as the opportunity to splash and pound on the keys. Trifonov’s approach, by contrast, was immensely refreshing. The sound rarely rose above mezzo forte, yet was filled with subtly understated élan, gentle insistence, and sheer poetry. This was highly evocative and unconventional playing, especially in Études 1, 5, 7, 10, and 11. Trifonov is one of the most pianistically soft-spoken virtuosos today.

The generous encores included two more piano arrangements, similar to the program’s beginning. The first was Trifonov’s own take on Johann Strauss Jr.’s Die Fledermaus, a deliciously wild and witty barnburner. (Trifonov composes music, as well.) After Chopin’s stylish Waltz, Op. 18, Trifonov offered Rachmaninov’s elegantly droll and touching arrangement of Bach’s Gavotte. All in all, it was the shortest 2¼-hour piano recital I’ve ever heard. Daniil Trifonov will repeat this program at Herbst Theatre on Feb. 28.