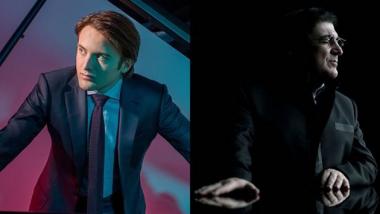 Successful piano duos have often been either couples or siblings, from Wolfgang and Nannerl Mozart to the Labeque Sisters. That makes the Daniil Trifonov/ Sergei Babayan duo somewhat of an oddity, as the former was a student of the latter. So was the partnership in performance at Davies Symphony Hall on Tuesday, Feb. 27 a true meeting of the minds?

It was clear in the first measures of Robert Schumann’s Andante and Variations in B-flat Major, Op.46, that it was a partnership of equals. Exchanges were carried on like a genial yet mutually respectful conversation. Even the intricate weave of melodic lines that intersect dissonantly were carefully balanced so that they would become merely a small knot that holds the two silk threads together. Being equal of course does not mean the same: Trifonov was more exuberant, with more volatile dynamics, though Babayan projected a brighter tone than Trifonov.

The arrangement of the pianos onstage helped the balance, too. Rather than dovetailed to each other, with the lid of one piano raised, and the other removed entirely, the two pianos were pushed closer so that the distance between the two players were closer. In addition, the lids were removed from both instruments so that one would not be emphasized more than the other. The reflective panels above the stage helped the sound travel through the hall without drowning it in resonance.

Avro Pärt’s Pari Intervallo provided a serene and solemn interlude. Two sets of parallel lines in slow, contrary motion gave the audience an insight into how the two pianists mesh with each other, carefully balancing the notes, in slow-motion.

But the real surprise was the Mozart Sonata for Two Pianos, K.448. Taken at a very brisk pace, Mozartean symmetry bounced across the stage, as if the performance were a tennis match. Improvised embellishments and ornamentations were added indulgently in the second movement, lending a more playful atmosphere, like two opera singers inspiring each other. In the third movement, there was even a small improvised cadenza where Babayan seemed to throw challenges to Trifonov, to which Trifonov responded valiantly. Such a humorous exchange gave an exuberant sense of delight and spontaneity. Purists might contend that there was too much sustain pedal, taking away transparency in favor of volatility that is more Scriabin than 18th-century Vienna.

Indeed, the audience was waiting for the Russians to play Russians: Sergei Rachmaninoff’s Suites No.1 and No.2 that comprised the second half. The first suite, also known as Fantasie-Tableaux, was written in Rachmaninoff’s youth, before the disastrous premiere of his first symphony sank the composer into a deep depression. Written as a showcase for Rachmaninoff’s virtuosity as a pianist, while being deeply rooted in Russian lyricism and the tradition of skazka or tales, it imposes a stratospheric demand on the pianists not just technically, but also as an ensemble. Here, the pair truly shone. Lyrical lines in octave unisons were balanced so that they didn’t sound as if they were coming from different instruments, but rather from a single piano with a far richer voice than possible with only one. Fluttering triplets that add texture were deft and delicate, never overbearing or heavy. Even in the repeated ostinato of “Easter,” the duo made the most of the composition, by adding different colors and emphasizing different aspects of the monotonous score.

The majestic and triumphant opening of the Introduction (alla marcia) to the second suite was unleashed with all stops pulled, creating a tremendously festive atmosphere. The waltz followed with nary a breath, at a dizzying velocity, but with the utmost clarity and synchronicity. Above the nearly blurred but not smeared eighth notes, melodies floated above like ribbons. Even in the charged “Tarantella” with parts exchanged between the two, the spirit was of cooperation rather than competition. We witnessed unity across two generations, two musicians creating a rare, unified voice.

The encore, a Vronsky/Babin arrangement of Nikolai Rimsky-Korsakov’s “Dance of the Tumblers” from The Snow Maiden was a last soft-shoe in a superbly choreographed performance.

The performance by the Russian concert pianist was absolutely astonishing and matched by MTT and his musicians.

Warm and fuzzy it wasn't, but Gidon Kremer's traversal of two pieces by Soviet composer Mieczysław Weinberg were worth the price of admission.