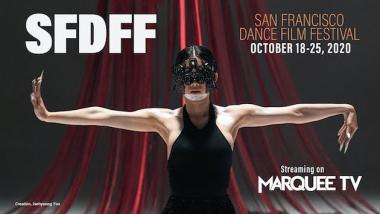 Tripping the Light Fantastic on Film (at Home) 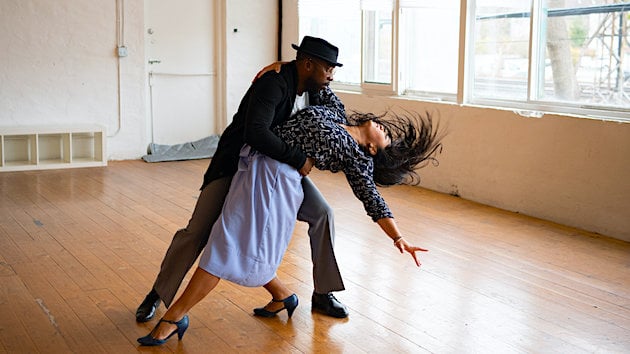 This is, as universally acknowledged, a year like no other. And similarly, the San Francisco Dance Film Festival in 2020, Oct. 18–25, is an event like no other. We’ve grown utterly familiar with screening and streaming at home; now we’re watching stuff that could have, as in the fest’s 10 previous years of existence, been streamed at home but has generally been presented in theatrical spaces. No more. The new festival’s offerings, whatever their levels of professionalism, are mostly streamed.

Access, this year, is via Marquee TV, a cultural streaming service that appeared in June, just in time for lockdown. A pass for just the dance festival is $50, and entitles the viewer to the 20 videos in this year’s SFDFF. To access the full range of Marquee TV, you  have to join online, and there are various levels, topping out at $89.95 per year. Offerings beyond dance (can there be any such thing, my friends?) include live classical music, opera, theater, and on and on. There are reduced rates for students and free trial options with the attendant legalese. 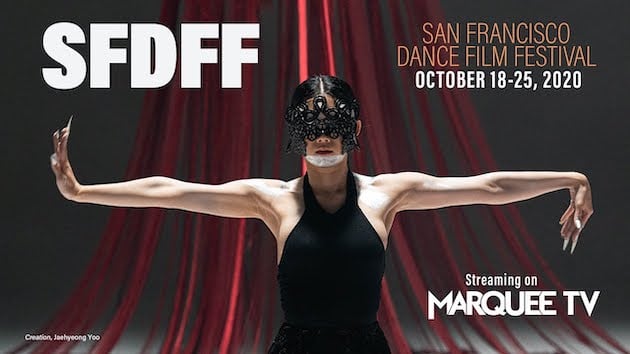 The festival is huge, thanks to a blend of feature-length offerings and a storm of shorts, and richly diverse, spreading from the Bay Area to the widest world. Fame and obscurity move gracefully cheek by jowl, hand in hand. And a lot of the video on offer may make its way, sooner or later, to services such as Vimeo, YouTube, Amazon Prime, and Netflix. Herewith some heads-ups, product of a long weekend’s rewarding skim-and-browse. Your reviewer’s suggestion: Go for the Marquee connection at whatever level you can. For dance lovers, this is where a year like no other pays off.

Director Khadifa Wong’s exploration of jazz dance carefully notes its origins and strongly encourages other explorers to do likewise, this anthology blends live — and stunning — studio work, archival material and scholarly insights. We learn, for instance, that the Cakewalk originated when enslaved peoples imitated and satirized their masters, and the dance became the foundation of all Broadway dancing, according to one of the professors. Uprooted also explores the Harlem Renaissance, the relatedness of African juba and Irish stepdancing, and so much more.

The Contemporary Dance Company of Angola, working in the capital city of Luanda, places the vitality of the dance rituals of ancient communities in a modern context. Directed by Kamy Lara and Paula Agostinho, the result is stunning and poignant; steel and straw. “I will remember,” says the narrator, as we see a line of dancers in native dress, the dust cloud that rises as they move through the countryside as if through a dream. “I need to remember this.”

Choreographer Crystal Pite and Jonathon Young’s (Betroffenheit) utterly amazing stage production of Nikolai Gogol’s The Government Inspector was the last live show in London before the shutdown. That adds a special note to the overload of perfect absurdities that spring forth from the marvelously agile dancer/actors, lip-synching the play as they move through vignettes that freeze and flicker in strobe light. Directed by Jeff Tudor, it was videoed by the BBC. Can’t wait to see Revisor in toto.

Using technical wizardry like photogrammetry and chroma-key capture, director Wilkie Branson’s Tom moves from a lonely windswept place by the ocean, serviced by a single-car train, to what looks like the bustling London underground and its attendant bustlers. The trick: Every bustler is Tom, only dressed in different garb. If you don’t know technology — and who can keep up with it? — you may think of paper doll cutouts and cardboard scenery. The mood is dark, often scary; the movement is herky-jerky, until we get to the evolution of Tom, the man, becoming father to a real live boy. “TOM tells the story of one man’s journey to rediscover who he really is.” The discovery takes 56 minutes, and is well worth the journey, however chaotic it may be.

An 83-minute appreciation of the brilliant Verdon, subject of a gripping semibiographical miniseries last year, gives the eager viewer rare footage of Verdon dancing in film and on Broadway in Bob Fosse’s greatest hits, but the narration is poorly written and the insights into her greatness minimal. Directors Chris Johnson and Ken Bloom do provide good perspectives from Broadway dancers Chita Rivera and Charlotte d’Amboise as well as from Verdon’s son and daughter. Also available on Amazon Prime.

Maurice Hines: Bring Them Back

Director John Carluccio’s feature-length close-up of the other Hines, Maurice, whose brother, Gregory Hines, was cut down in his prime. An affecting portrait of a gifted tapper and entertainer on Broadway and in Hollywood who struggled with the vicissitudes of being gay and black, as well as being overshadowed by a superstar, in the course of his 70-year career.

And a few fine shorts among the many:

Being — masterly tango framed as a civilian event. Charming.

Bad Feeling — A couple in sarongs, romantically entwined and embattled, in a baroque ballroom. Polynesia meets Paris, complete with a view of the Eiffel Tower.

Cinderella Games — The English National Ballet asks, what if Prokofiev’s ballet were a quiz show? Grab a box seat, and let’s find out. Delightful.

A Dream of a Dance

Of Sorrow, Revelations, Joy, and Hope

Hope Boykin carries on the important work of dancing, creating, and sharing, even as the dance stages and studios are shuttered.

Our dance critic shares a bevy of great movies to set your spirits dancing.