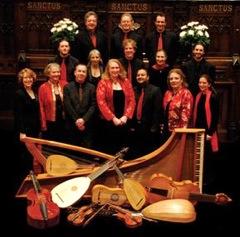 The Triumph of Monteverdi’s Madrigals

And the winner is ... Claudio Monteverdi! He was well-served Saturday night in a Berkeley Festival performance at that city’s First Congregational Church. ARTEK (from The Art of the Early Keyboard), a New York–based ensemble of six singers and seven players of plucked and bowed strings, gave magnificent voice to Monteverdi’s Fifth Book of Madrigals. Harpsichordist Gwendolyn Toth, ARTEK’s founding director, framed the music with 16th- and 17th-century publications and letters, from which she and the singers read — effective speakers, all.

Monteverdi’s compositional style had been attacked for its violations of established rules of music theory by Giovanni Maria Artusi, and Monteverdi defended himself by announcing a new approach to the traditional style: the words governing the harmony rather than vice versa, resulting in expressive use of dissonance and counterpoint. The Fifth Book of Madrigals, as performed by the outstanding musicians of ARTEK, is a stunning vindication of the composer. The words are mostly by Giovanni Battista Guarini, whose love poetry inspired musical settings by many composers. Monteverdi set the poems as five-part madrigals, and the ARTEK singers sang, in both solo and ensemble passages, with passionate intensity. Listeners did not need translations to hear that these singers were in complete command of the verbal, and the musical grammar and meaning. (Still, I felt sorry for members of the audience who had not provided themselves with the Festival Reader, which included texts and program notes.)

The program was beautifully arranged, having been grouped into five segments, with the central portion following the narrative of Guarini’s famous epic poem, Il pastor fido (The faithful shepherd). The first and fifth groups, except for a couple of anonymous texts, were settings of other poetry by Guarini. Some groups were accompanied by the excellent continuo players, some were a cappella. An ensemble of six singers is necessary for the five-part madrigals because Monteverdi employs them in various combinations — sometimes using one soprano or tenor, sometimes two, sometimes with no alto. One singer is always left out (except for the bass, who, if paid for the number of notes sung, would get a nice bonus).

Monteverdi really got grooving in the program’s last set of madrigals. Textures were varied — sometimes five singers, sometimes duets with trio refrains — and forms grew increasingly complex, as repetition was used for dramatic effect. Monteverdi gave T’amo, mia vita (I love you, you my life) — a poem also set by other composers — an extraordinary setting. The instruments provided colorful continuo support, and the first soprano sang the title line. The men followed with other lines, and the soprano kept returning to “T’amo, mia vita.” All ended together on the five-part setting of “T’amo, mia vita” la mia vita sia (Let “I love you, my life” be my life).

The concert ended with a six-part madrigal, E cosi poco a poco (And so, little by little), which featured solos, duets, a trio refrain, and everybody joining in on the final refrain: “chi spegne antico incendio il fa immortale” (whoever puts out an old blaze makes it eternal). You never forget your first love.