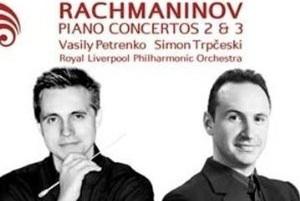 Like many orchestras these days — including the San Francisco Symphony — the Liverpool Phil began sponsoring its own recordings, in 1998. Those have usually been released by Avie, though Petrenko, a Russian, has also begun a cycle of the Shostakovich Symphonies for Naxos; the 12th is finished, with Nos. 5 and 9 due next.

Trpčeski, who hails from Macedonia, has already made a string of prize-winning recital recordings, not least his EMI release of Tchaikovsky, Scriabin, Stravinsky, and Prokofiev, which won Gramophone Awards. He’s played with most of the world’s major international orchestras, in cities as far afield as St. Petersburg and Tokyo. (And, by the way, Trpčeski and Petrenko will appear on the S.F. Symphony’s April 1-3 subscription concerts.)

This CD’s performances form an interesting combination of contrasting elements. The playing is quite assertive in the bravura passages, though very lush and mellow, featuring sensitive phrasing, in the lyrical passages.

Trpčeski’s fast, trip-hammer playing during Rachmaninov’s fiendishly difficult Third Concerto rather outstrips even Vladimir Horowitz’s last recording — the one with Eugene Ormandy and the Philadelphia Orchestra. Like the young Horowitz, he sometime dashes a little ahead of the tempo during virtuoso extremes. In a piece like this, though, he has a perfect right to be a tad nervous in spots.

Conductor Petrenko, also a prizewinner, tends to keep such touchy moments together. The ultraquiet passages (and those are indeed ultra) never lose their tension. Tempos and balances are generally excellent, save for two minor elements.

The slow movement of the Second Concerto strikes me as slower than need be. And in full tuttis the percussion, especially the timpani, are far too assertive. I can’t say for certain whether this is a result of the sound engineering, the conductor’s wishes, or merely the overly zealous percussionists. But it’s bothersome nevertheless.

Liverpool can be proud of its Philharmonic, which has produced a host of fine recordings over the years. It’s clearly a fine ensemble; indeed, I treasure several of its releases. Petrenko, born in St. Petersburg in 1976, has been associated with the Philharmonic since 2006, which has him under contract through 2015. I only wonder if they’ll be able to keep him beyond that. Clearly, he’s a major talent, as is Trpčeski, who was born in 1979. (Being of the same generation does make a difference.)

One unusual quality of the Third Concerto recording is that it offers the full, uncut score. The composer himself made a number of cuts not long after the work’s premiere in New York. The uncut version is obviously longer — a tad under 42 minutes here — yet it holds together better when the form is freed of the sometimes jarring shifts in texture that occur in the cut version. The cove booklet, by the way, includes good notes in English, French, and German.