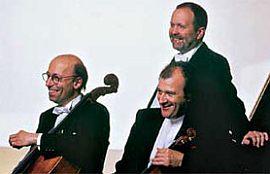 David Bratman on November 4, 2008
The Romantic era in music is not dead. The Paris Piano Trio brought it, alive and kicking, to Kohl Mansion in Burlingame on Sunday. The ensemble's three noted performers, each one a distinguished professor at the Paris Conservatory, have been playing together for decades, and in recent years have been making a priority of touring with the repertoire for piano, violin, and cello. The opening work was Gabriel Fauré's Trio in D Minor, Op. 120, which he wrote at the age of 78 in 1923. This was long after the Romantic era ended, according to textbook dates, but Romanticism is a matter of the heart, not the calendar. Fauré presents long string-melodies, which constantly shift and are transformed, over continuously flowing ripples in the piano. The composer called this work his "little trio," yet it was anything but little in this performance. It was big and bold, as powerful and forward-moving in the gentler opening movement as in the vivacious finale. That was the principal French contribution to the evening. (For an encore at the end of the program, the performers presented a serene rendition of the dark passacaglia movement from Maurice Ravel's Trio in A Minor of 1914.) In the early 19th century, the French considered chamber music to be the province of Germans, and we had a couple of those, too: Felix Mendelssohn's Trio No. 1 in D Minor, Op. 49 (1839), and Robert Schumann's Trio No. 3 in G Minor, Op. 110 (1851). Some critics of chamber music will tell you that Schumann's Op. 110 is dull and wearied, the last enervated gasp of creativity from a man at the end of his tether. Don't believe them. This was a barn burner of a performance, especially in the much-criticized finale. The Parisians presented the discrete, somewhat disconnected sections of this movement as a mosaic of moments of charmingly varied character: marchlike, lyric, dark and mysterious, and other moods, by turn. The effect was like a return to the suites of piano miniatures that began the composer's career. Schumann didn't have an inch of room left in which to sink into despair. For the Mendelssohn, which concluded the program, it's tempting to say that the Parisians pulled out all the stops, except that that's just what they didn't do. With much more restraint than in either of the other works, they found the lightness that's sometimes so elusive in Mendelssohn's chamber music. This made the stronger, more emphatic moments really count.

The outstanding work of the evening came from the pianist, Jean-Claude Pennetier. He played with a consistent tone of firm clarity, fingers solidly on the keys at every moment. But within that framework, his stylistic range and command of tone were remarkable. From a gentle running background in the Fauré, through a firm underpinning in the Schumann that avoided that composer's clotting tendency, to an alternation in the Mendelssohn between airiness and power, he always kept his tone strong and even, whether providing a background or firmly emphasizing tutti chords. The two string players make an interesting pair. Régis Pasquier's violin was dry and cool, at his best in crisp fast or staccato notes. On cello, Roland Pidoux seemed most at ease with slow lyric melodies, so important especially in Mendelssohn's cello part. In quicker, flashier sections, Pidoux had a slight strain in his playing that gave a welcome addition to the tension in the music. Together, the string players were more comfortable passing motives back and forth among themselves and the piano than in the long octave or unison melodies that are a feature of Fauré in particular. Their bowing and vibrato practices sometimes separated. They were at their most charming, if not always their most precise, in Schumann's staccato or pizzicato special effects, as well as in the eerie oscillations at the end of Mendelssohn's slow movement. The only unpleasant part of attending a concert at Kohl Mansion turns out to be before the music starts. On previous visits — I was last there a couple of years ago — the audience would line up docilely, snaking through the foyer and reception room before calmly taking their general admission seats in the hall. But the rules have changed. Now, as attendees hand in their tickets, they are given seating-group cards, as if this were Southwest Airlines, and, as on a Southwest plane, there's a bit of a scramble and some unseemly grumbling over who gets the best seats. This is unfortunate and unnecessary. Although the sightlines in Kohl's Great Hall are highly variable, as far as sound is concerned there are no bad seats in this small, bright room. In fact the hall is so tiny, and the acoustics are so vivid, that a little distance from the performers might be an advantage. If Kohl management would consider numbering their seats, that might put an end to any fuss over who is entitled to sit where. The staff get points for being calm, polite, and patient through all of this.