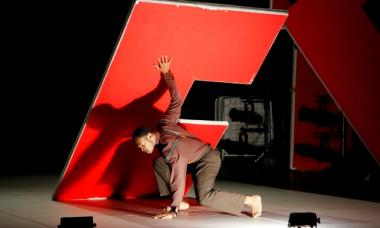 Janice Berman on March 14, 2016
Analogy/Dora:Tramontaine, the story of Bill T. Jones’ 95-year-old mother-in-law, Dora Amelan, as a 19-year-old French Jew –- and resister — during the Nazi occupation of France, is a strange and exhilarating mixture of spoken word, music and choreography. In a manner neither strident nor sentimental, it evokes the perils of that war and all wars, that Fascism and all Fascism. Yet it also depicts for a few sublime moments, hope, and for Dora Amelan to have survived all that, and all these years, with hope intact is ample reinforcement.

Analogy’s… sparely versatile red-and-gray sets – moveable cardboard walls, really – are the design of Bjorn Amelan, choreographer Jones’ husband and Dora’s son. The correspondences between racism (Jones is African-American) and anti-Semitism are important to Jones personally as well as globally. Jones and Arnie Zane, who was also Jewish, founded the company, still named as a memorial to him; they began dancing together in 1971. The majority of Jones’ most powerful works over his illustrious career have explored racism and social injustice.

The nine dancers, and the grace, attack, and cohesion of their movement, are pure Jones, even though they’ve arrived in the company from a myriad of modern dance disciplines. Jones and associate artistic director Janet Wong have inculcated a pliant and passionate stylistic unity and an unforced musicality. It’s a beautiful company.

They wear casual clothes of no particular period. The music, sung and played by Nick Hallett and Emily Manzo, reaches from Schubert lieder to French songs to Anna Marly’s “La Chant des partisans,” as well as some modern runs by Hallett. So we have a spectrum of German sentiment (their evocation of Yiddish songs is certainly no accident), optimistic French romance, a rally of hope, and Hallett’s discordant snippets. It’s a pretty neat encapsulation of the 90 minutes of ups and downs.

Dora’s voice opens and closes the piece. In between, dancers take turns voicing the memories that Jones — who interviewed Dora for what he initially planned as a gift to his husband and brother-in-law — recorded.

At 19, with the Vichy regime in power in France, Dora (who became a social worker and a nurse; today she lives in Paris) worked with a children’s aid society to protect young Jewish children from deportation to Nazi death camps, a fate that befell thousands of French Jews. She was interned in two miserable camps, nearly dying from typhoid fever; but she kept working. She had to make decisions that, while protecting the children, sometimes resulted in the death of their parents. The pragmatism of her decisions as an activist helped save her and hundreds of potential concentration camp deportees.

It’s a complex story (co-commissioned by Yerba Buena Center for the Arts, it’s the first in a projected Jones trilogy on activism and social change) and on occasion the narrative threads unravel. The intensity of the choreography, developed by Jones, Wong, and the dancers, is often enough to bridge these gaps.

Amelan’s set also includes a cube of pipes that can stand for a cage, or perhaps a boxcar such as those all over occupied Europe that took the Jews away to the camps. The dancers lie there, leaning back on their elbows as if swept up and powerless against this evil; they also often huddle fearfully behind the cardboard, whose notches take on the look of windows and doorframes.

But at an ecstatic moment near the end of the piece, the stage is filled with dancers joining hands in a festive circle dance (their grapevine steps evoking a hora), their strength and resilience symbolized by their shadows, implacably tall, cast on the wall behind them. Far bigger -- and more powerful -- is the message than the shadows of totalitarianism.

Dora Amelan told him her story of survival with no trace of anger, Jones said in an interview. Said his mother-in-law, “Why should I be angry because the others are bad?”