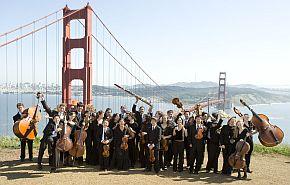 Heuwell Tircuit on November 16, 2009
The normally high standards of the San Francisco Symphony Youth Orchestra were only dimly in evidence Sunday afternoon in Davies Symphony Hall. Their recently appointed new conductor, Donato Cabrera, seemed only partly in control of himself, as well as the orchestra, through one modern standard and two major classics.

Cabrera opened with Christopher Rouse’s zesty Infernal Machine (1981), followed by Haydn’s Symphony No. 92 in G Major, “Oxford” (1789). Following intermission, we heard Elgar’s virtuoso Enigma Variations (1899). This was a relatively short program, then, and, as usual with the Youth Orchestra, no encore was offered.

Rouse’s Infernal Machine has become his most frequently programmed work. It’s a sort of whirligig toccata that moves along in quick tempo. Scored for large orchestra heavily laden with percussion effects, the piece runs about six minutes. Many of the textures are quasi-minimalist ostinatos that pile up into a roaring climax. It seems to owe something to Ravel’s Bolero in that respect, and is every bit as effective a crowd-pleaser.

Trouble is, it’s meant to be more than a mere noise machine. But Cabrera apparently thinks otherwise. He allowed, and indeed encouraged, the orchestra to overplay dynamic levels. This was especially acute in terms of the percussion section, whose players too frequently tore into their instruments with maximum force, which is untypical of these players.

I recall that the last time I reviewed this orchestra, they played a beautifully virtuoso performance of Berlioz’ Symphonie fantastique, one glowing with brilliant subtlety. That was as sensationally balanced, including elegant percussion playing, as any in my memory. Hearing such coarseness from these same percussionists Sunday left me utterly befuddled. (The one exception was the young timpanist who maintained the section’s previous artistic standards.) But then, the Berlioz had had a different conductor.

As a nice touch for the Haydn, Cabrera reduced the orchestra to classical size — four double basses instead of the 10 used for the Rouse and the Elgar works. He also had the remaining musicians seated in classical style, first violins to his left, seconds to his right. That’s typical of late-18th-century orchestras.

The birth of Haydn’s 92nd Symphony was of convoluted origin. In the newly formed Loge Olympic, Paris had Europe’s first very large full-time orchestra, thanks to the patronage of Count d’Ogny. It boasted 40 violins, at a time when few other orchestras could even seat more than 40 musicians, total, on their stages.

Why Call It the “Oxford”? Beats Me

D’Ogny had been the force behind the commissioning of the composer’s six “Paris” Symphonies, Nos. 82–87, and they so pleased the music-loving Count that he commissioned three more (Nos. 90–92) for his own personal use. However, the French Revolution had taken place, so the premiere of No. 92 was moved to London. Music historian Charles Burney was so taken by the piece that he recommended that Oxford University grant Haydn an honorary doctorate degree. The university did so, and somehow the symphony got nicknamed his “Oxford” Symphony. (This makes no real sense, of course, but what the heck.)

The performance, with one small exception, went very well. The youthful players tossed off the music with a touch of grace throughout — no roughhousing this time. Here again it sounded like the orchestra I’ve so admired for years. The one flaw was the rhythmic irregularity during the trio of the Menuetto. Haydn composed a little oddity there that’s normally a high point of the score.

In most minuets, the first beat is accented. Haydn adds an even stronger accent on the second beat Meantime, while the lower voices leap upward from the second beat to a strongly accented third. And that’s held over to the next downbeat. This "sonic hiccup" is a great joke, suggesting a dancer with only one leg.

The string section, which had covered itself in splendor all afternoon, continued to do so, with warmly rich timbres throughout the Elgar variations. So, too, there were excellent wind soloists, notably the principals on flute and clarinet, who displayed controlled soft dynamics that would do justice in a professional orchestra.

Yet again, Cabrera turned up his hard-sell volume levels on the brass and those bashing percussionists — too bad, as Elgar wasn’t a composer of hard-rock. I doubt that even Stravinsky’s Rite of Spring could have withstood this kind of unbridled aggressiveness with timbre. It was too often a hyper performance, especially during the climaxes.