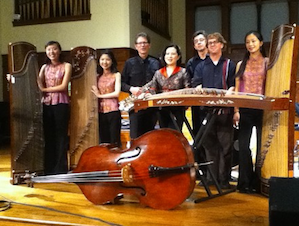 In presenting Magical Adventures of the Monkey King as the centerpiece of its Friday concert at Old First Church, the Ultra World X-tet seemed to have taken on some of the qualities of the composition’s title character. The five-person ensemble, like the marvelous mythical monkey Sun Wukong, covered a great deal of ground in a short time, wielding magic in service of a lofty mission. The X-tet’s magic, of course, is musical, and its mission, as described in its printed program, is “to combine elements of Western and Asian traditional and contemporary concert music, as well as jazz and experimental textures, into a hybrid musical language, with respect for and mastery of traditional forms.”

This is a lot more fun than it reads, and it began Friday with X-tet leader Gary Schwantes’ arrangement of Grace Slick’s song White Rabbit. Supported by Doug Ebert on bass and Surya Prakasha on drums, the ensemble’s two Chinese instrumentalists took up, in turn, the haunting intro riff, with Winnie Wong playing the guzheng, a 5-foot-long plucked zither, and Yangqin Zhao on the yangqin (for which she was named), a hammered dulcimer similar in range to the guzheng. Schwantes segued to Slick’s melody line on dizi, a Chinese transverse bamboo flute. This take on the 1967 psychedelic hit by the San Francisco–based rock band Jefferson Airplane presented an interesting contrast to the arrangement of the same song by Jeremy Cohen, performed just a week earlier by his Quartet San Francisco, in concert at the Marin Veterans Auditorium. The QSF kept the dynamics and melody recognizable, while the X-tet’s shimmery acoustics dissolved some of the song’s structure, even as it preserved its entrancing modality.

Switching to a soulfully blown tenor sax for his arrangement of the Sichuan folk melody Kanding Qing Ge, Schwantes, sometimes in unison with Wong, worked a jazzification of world music suggestive of the approach of Manfred Eicher’s visionary ECM record label. He followed this with a folk melody from Xinjiang, another region of China, curiously titled Night Market Brothers. The affinity to blues of some Chinese modes was evinced here, underscored by Prakasha’s backbeat drumming. The melody somehow evoked Neil Young’s plaintive Ohio, though it sounded more like a romp than a protest song.

The final piece in the program’s first half was a Schwantes original, a sneaky strut into which he worked striking changes on the blues.

Schwantes next turned to soprano sax and the “Gardens of Aranjuez” section from Joaquin Rodrigo’s concerto. Of course, Miles Davis had been there with a trumpet and a brilliant jazz arranger (Gil Evans) in 1960, but the X-tet’s visit was distinct and impressive in its own right, with guzheng and yangqin harmonizing affectingly under the sax, then taking their own solos, the latter instrument finding a way to interpolate an identifiably Chinese scale into Rodrigo’s Iberian Phrygian mode, sounding like a liquefied guitar. Prakasha made imaginative use of a castanetlike element in his percussion kit, before laying down a rock foundation.

The final piece in the program’s first half was a Schwantes original, Southern Comfort, a sneaky strut into which he worked striking changes on the blues as well as an impressive improvised solo. Wong (wearing a Mandarin blouse, which she calls a tang zhung) showcased the considerable dynamics of her instrument, and Ebert got his own nicely intoned and articulated solo time.

Magical Adventures of the Monkey King, composed by Schwantes, occupied the entire second half of the program. Narrator Rena Wang supplied an introduction to each of the four movements, in both English and Mandarin, setting the story in the context of the four-century-old Buddhist myth, well known in the Far East and a source of books, operas, and even a TV serial. Indeed, Schwantes’ own creation often had the appeal of a soundtrack, with the movements further subdivided into sections of varied tempos and time signatures, along with additional instrumentation (including Chinese wood blocks) and dynamic arrangements. The piece’s fanciful impact brought to mind yet another timeless jazz soloist/arranger collaboration, Stan Getz and Eddie Sauter’s Focus, from 1961.

Larger audiences would be better off with some exposure to unfamiliar musical forms and instrumentation.

In Monkey King’s first movement, drummer Prakasha enjoyed an extended solo and deployment of the wood block, in the style of Peking Opera. He turned to a harmonium to accompany his vocables in the second movement, with Ebert maintaining a Western pulse under traditional Chinese melodies. The arrangement (following the story line) went a bit purposefully wild in the third movement, in the sort of sophisticatedly humorous vein explored by avant-garde jazz groups like The Bad Plus. The final movement moved toward a rousing and happy resolution to the tale (spelled out in the printed program notes), with tenor sax and bass intoning a comforting melody in unison, and the yangqin singing a luminescent solo over a backbeat on the drums. Delights of this movement also included Prakasha working the harmonium with his left hand while articulating the tom-tom and cymbal with his right, and Schwantes soloing sweetly in the style of veteran tenor-player (and ECM recording artist) Charles Lloyd.

Although Schwantes appeared content to appear before what he described as “a nice, intimate crowd” at Old First, his Ultra World X-tet deserves wider exposure. Larger audiences, for their part, would be the better off with some exposure to unfamiliar musical forms and instrumentation, as well as the realization that these formerly exotic elements can become quite familiar and entertaining when they’re so successfully and imaginatively integrated with what they’ve known.